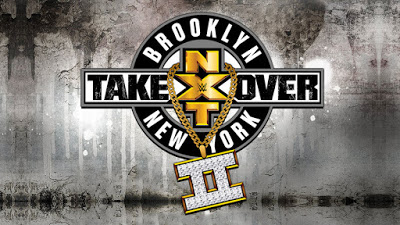 One year ago NXT made history by being in the Barclays Center! One year ago it was a phenomenal event that I still haven’t forgotten about. The big question going into tonight is could they repeat this history and set a new precedent. Before I begin with my thoughts here are the results of TakeOver

The opening match was between No Way Jose and Austin Aries. Right from the beginning the crowd was absolutely on fire and absolute a joy to listen to. Both men have very different styles but that it was intense for an opening match. I was honestly surprised Aries went over but I was even more surprised the Hideo Itami came out after the match. Aries continued a beat down on Jose after the match and he got a GTS from Itami for his troubles. Speaking of trouble, Billie Kay got herself in some much trouble by asking for a high profile match. That match was against Ember Moon. Moon looked like a comic book character with lots talent. I could not believe what Moon did for a finisher. All I have to say is wow and what a hell of a debut for Ember Moon,

Speaking of debuts, tonight marked the WWE Network debut of Bobby Roode. What a debut and what an entrance. Andrade Almas usually isn’t booed but in this case he couldn’t over match the popularity with Roode. This match had action, comedy and intensity. A lot of great storytelling in this match for two guys who have never fought each other. Roode had a glorious victory and the crowd was very into the character through the entire match. When I think of glorious in terms of wrestling I think of what I saw a couple of weeks ago between Tomasso Ciampa and Johnny Gargano. They really deserved the tag title shot against The Revival.  I really think the Revival should be on the main roster and this match proved it. This was really great tag team wrestling. This is what tag team wrestling should be all about. I was hoping for a Ciampa-Gargano win but what a classic match that will be remembered for a long time.

Bayley had a memorable Brooklyn last year against Sasha Banks. Going into Brooklyn I kept thinking to myself that this is Bayley’s last NXT match. I also kept thinking that Bayley and Asuka were going to have a hell of a match. I thought it was a great match but I still think Bayley and Sasha will always be the greatest Women’s Match in NXT history. I really see Bayley moving to the main roster now. There is nothing left for her to prove down in NXT. It is Asuka’s playground now and she’s the future of the division. Another start from Japan is also looking to be the future of NXT. Shinsuke Nakamura challenged Samoa Joe for the NXT Championship in the Main Event. Nakamura had an amazing violin player play his way to the ring. Once the theatrics were over this match was absolutely hard hitting and aggressive. This match was epic and an instant classic for what a title match should. I do hope Samoa Joe is not seriously injured. He walked out with trainers after the match.

NXT TakeOver Brooklyn Pt. 2 was another successful event for the NXT brand. As always they raised the bar for the main roster and Summerslam. I really think this event ended the NXT run of Bayley and possibly Samoa Joe once he gets his rematch with Nakamura. I have to rate NXT TakeOver Brooklyn 9 out of 10. NXT is indeed taking over