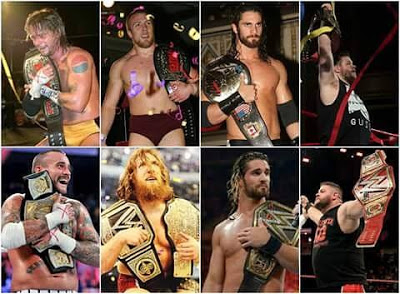 Last night Kevin Owens shocked the world by winning the WWE Universal Championship. By winning one of WWE’s newest and richest prizes he puts himself in elite company. Before Kevin Owens three other men from Ring of Honor Wrestling have won a version of a WWE World Championship. Those men are CM Punk, Daniel Bryan and Seth Rollins. When I watched Kevin Owens win the title on Monday Night Raw I couldn’t help but think that Triple H has a vision and that he truly knows talent. I think his influence is starting to show more and more these days. If you don;t believe me look at the WWE roster as a whole including NXT. It is heavily influenced by the ROH/NJPW partnership.
On Raw you have Cesaro, Finn Balor, Karl Anderson, Kevin Owens, Luke Gallows, Neville, Sami Zayn, and Seth Rollins. On Smackdown you have just AJ Styles but he’s be absolutely awesome for the show and the company. On NXT right now you have Austin Aries, Hideo Itami, Johnny Gargano, Samoa Joe, Shinsuke Nakamura, and Tommaso Ciampa. Even the new Cruiserweights coming like Noam Dar, TJ Perkins and Cedric Alexander even spent time in ROH. There a guys like Bobby Roode, Eric Young and possibly James Storm may have not been in ROH but they were the heartbeat of TNA for a long time. It’s almost like Triple H is pulling another Vince McMahon move. In the early 80’s, Vince McMahon got every great talent from all the various territories and made the WWE a powerhouse that no one could touch.
In the last 15 years the WWE has gotten very stale, predictable, and has had the same old talent doing the same old thing. Triple H has the Vince McMahon vision from 30 years ago. He is seeking out the absolute best talent in the world to make WWE the best place for the foreseeable future.  There are a lot uneducated wrestling fans who call some of these superstars “vanilla midgets” and some criticize Kevin Owens for not having an athletic body. Guess what folks? “The American Dream” Dusty Rhodes didn’t have an athletic figure either. For those who say Owens lacks character obviously don’t see it. He’s one of the best heels in WWE right now. He’s quick witted, and a complete jerk in everything that he does in front of the camera. These so called “vanilla midgets” have more talent then most of the guys that were around in the 80’s and 90’s. I don’t judge the direction WWE goes anymore because when I do I ask myself could I get in there and do it? The answer is absolutely not.
I only wish I had the amount of talent that the former Ring of Honor, The World Wrestling Network AND New Japan stars have brought to WWE. All these promotions should be given some sort of funding from WWE considering all the talent WWE has taken from the over the last 5-10 years. I am pretty sure that WWE is heading in the right direction for the future but what if these promotions weren’t around. Could WWE honestly survive with just having the Performance Center? Hopefully we will never have to find out. If you don’t follow promotions such as NJPW, ROH, RPW and The World Wrestling Network I suggest you start because these promotions are going to shape and influence the future of WWE for many years to come.
Please Share This