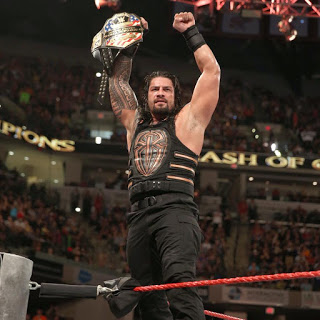 This past Sunday at Clash of Champions Roman Reigns competed in a very physical match against Rusev and walked away with the United States Championship. Roman Reigns came into the WWE with Dean Ambrose and Seth Rollins as The Shield. The Shield ran hard in 2013 and into the early months of 2014. When The Shield broke up all three men went their own ways. Seth Rollins was backed by The Authority while Ambrose and Reigns chased after him. I want to take you back to the Royal Rumble in 2014. The final two men were Batista and Roman Reigns. The crowd desperately wanted Reigns to beat Batista but it didn’t happen. Over the next year Roman Reigns was being pushed heavily as the guy to replace John Cena but fans didn’t take to it very well.
At Wrestlemania 31, Reigns took a massive beating from Brock Lesnar and proved just how tough he was. He proved he belong in the Main Event and proved he’s the only one who could take such a beating. Even then the fans still did not respect him. He spent most of 2015 chasing Rollins but once Rollins got injured he feuded with Sheamus and Triple H. From Survivor Series 2015 to Wrestlemania 32 Reigns captured the WWE Title 3 times, Even though he was the anti-establishment guy he was still being boo’d, Many people have stated that “Roman Reigns is being shoved down our throats.” Even I didn’t care for how much was being used. WWE in it’s history has had a habit of only making one mega star for an era. They did it with Hogan, Cena and were trying to do it with Reigns. The fans caught on and made WWE take a different approach.
Back in June Roman Reigns violated the WWE’s Wellness Policy and I’ll be the first to admit that I was extremely disappointed but I also realize people make mistakes and learn from them. The previous months leading up to this suspension Reigns had two phenomenal matches with AJ Styles. It was in these matches that I realized it was no longer cool to boo or hate on Roman Reigns. Some might say guys like Styles, Rollins and Balor carried Reigns in those matches but the last I checked it takes two to have a great match. So what’s everyone going to say about his matches with Rusev? No disrespect to Rusev but he’s nowhere near the performer of an AJ Styles or Finn Balor. Reigns can have great matches with anyone on the roster because he himself has become an elite performer. I personally think that one of the reasons he’s become an elite performer is because he teamed with Seth Rollins in The Shield. I think he learned a lot from Rollins and has carried on what he’s learned from his time in The Shield.
Right now Reigns is in a a good place right now. He’s the United States Champion who will make that title who will make that title mean something again. People got their wish and Reigns is not main eventing but he is putting on main event type performances. I think this is the right path for Reigns to get back into the main event spotlight and WWE Universal Championship picture. At this point if you’re hating on Reigns and booing him then you’re obviously a fan that will never be happy with anything. Fans should just be happy going to a show and enjoying the product that’s put in front of them. I think Reigns is still a big part of the future for WWE and his abilities, talent and passion should be appreciated. I choose not to boo or hate Roman Reigns because at this point there is no reason to. I hope someday he will get the respect he deserves and people will appreciate his efforts night in night out.
Please Share This