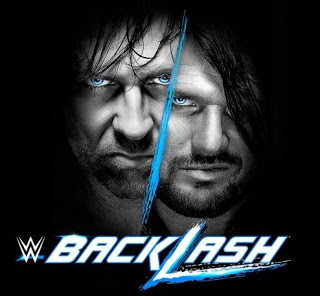 Tonight was the first Smackdown pay-per-view since the two shows split . I went into this pay per view worrying because of the lack of depth. I am glad they brought back a classic name for a show in Backlash. Could this Backlash live up to the of previous Backlash shows? Before I talk about the night here are the results:
-PreShow: Baron Corbin defeated Apollo Crews
-Becky Lynch wins the 6 Pack Challenge to become the First WWE Smackdown Women’s Championship
-The Uso’s defeated The Hype Bros.
-The Miz defeated Dolph Ziggler to retain the WWE Intercontinental Championship.
-Kane defeated Bray Wyatt in a No Holds Barred
-Heath Slater/Rhyno defeated The Uso’s to win the WWE Tag Team Championships
-AJ Styles defeated Dean Ambrose to win the WWE Championship
The opening match was the 6-Pack Elimination for the Smackdown Women’s Championship. All 6 women put on one hell of an effort. It’s great to see Becky Lynch finally get her due. I think this women’s championship really showcased the talent of these women. They have a lot talent but they also have room to improve. Another thing that needs improvement is the booking of the tag team division. It makes no sense to reward a tag team for injuring another tag team, I understand the heel vs. face concept but I would have been content with a face vs. face match with The Uso’s interfering in the finals.
When it comes to right booking and great matches I love The Miz vs, Dolph Ziggler any time they have a match against each other. They are really good friends which means they always have great chemistry.  I love the heat that The Miz getting these days. People are actually somewhat talking about him again. They had another great match for the most prestigious belt in the WWE. I think The Miz’s reign and momentum is far from over. I think they need him to hold the title for awhile longer to really bring some legitimacy back to the title. We go from a good championship match a rather boring No Holds Barred Match! Randy Orton is still suffering from his match against Brock Lesnar and Kane ended up being his replacement. Orton ultimately came out and cost Wyatt the match to continue the feud that is suppose to happen.
As I mentioned before The Uso’s advanced to take on Heath Slater and Rhyno for the WWE Tag Titles. I still don’t like The Uso’s on TV and still don’t like them in real life. I really don’t like how it was booked but I am so happy that Heath Slater and Rhyno got put into the spotlight. I really hope Heath Slater starts being used properly. He’s been in the company for so long and now he’s getting a good spot in the company. When it comes to great spots in the company AJ Styles has earned his top spot in the company with all these incredible matches he’s had since his arrival. He definitely deserves the WWE Championship to his list of accolades.
The pay-per-view was very drawn out and I was about to give it a very bad review until the last two matches. The last two matches put this pay per view in a great place. I am excited for AJ Styles as WWE Champion. Smackdown just a good boost but now they need to add some depth. I will give the show a 7.5 out of 10. The ending of Backlash was simply phenomenal!
Please Share This