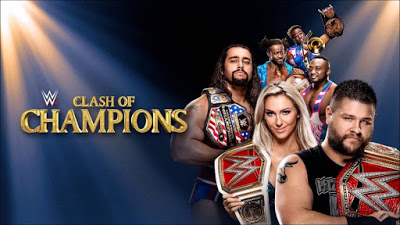 The opening match of the Clash was for the WWE Tag Team Championships. The New Day went in to tonight as champions for 399 days. It looks like they are going to keep those titles for at least 400 days. I really do hope The Club eventually get those titles because if they do they would only be the third team in history to hold the WWE and IWGP Tag Team Titles. The other two are The Dudley Boys and The Steiner Brothers. That is very impressive company to be in once they get there.Speaking of getting in the history books, it’s great to see the WWE Cruiserweight Championship back. This has been a long time coming but the one thing I didn’t care for is how they changed the ring ropes and turnbuckles for one match. They need to be looked at as equals among the rest of the roster. Now for all the people complaining about the Cruiserweights just don’t get it. Even though it was a solid match they do not need to ever do the purple ropes again. Those ropes were very slippery and it could have ended up badly for both competitors.

Something that hasn’t been bad has been the Best of 7 Series between Cesaro and Sheamus. Sheamus won the first 3 matches, and Cesaro won the next 3 matches. This match was very physical and brutal. This match was really good but Cesaro took a very unnecessary risk. Both men took some risks but that’s what happens when you’re overlooked and underutilized. Since the match ended in a No Contest what do you end up doing? I think they both deserve a title shot or put together as a tag team possibly. When it comes to get deserved attention there are no two guys right now who are more deserving then Sami Zayn and Chris Jericho. Jericho has been awesome in terms of character and telling a story and being extremely entertaining as of late. Zayn always delivers in his matches and hopefully they don’t hold him back like they have others before him. The match was very solid except for a few questionable spots but I don’t agree with Jericho winning. It doesn’t do anything for his career whereas it would have helped Zayn’s.

In a match where I didn’t care who won was the WWE Women’s Championship match. All three women are worthy of that title. All three women have put on incredible matches in the past. This was an incredible match for all three competitors. All three women should be applauded for their efforts no matter who won. Charlotte has now won 12 pay-per-view matches since her arrival and it her momentum is continuing to grow as each day progresses. When you talk momentum you have to talk about Roman Reigns and Rusev. These two have been built very heavily but and I was hoping that something would give tonight. Rusev and Reigns had an awesome match, I think this is a redemption road for Roman Reigns. I am hoping that this United States title win will bring more prestige for the title and this will get Reigns back to where he needs to be. I don’t know what people have against Reigns but it’s ridiculous. Congratulation to Reigns for winning the U.S. Title.

The Main Event of the evening was between Kevin Owens defending Universal Championship against Seth Rollins. I love how Foley and Steph were kissing up to both competitors. That’s the problem with Raw is that they are still making it about the people in charge instead of the people in the ring. Both Owens and Rollins are a product of Ring of Honor and if you would have asked me 5 years ago if they would be main eventing a WWE show I would have thought otherwise. WWE has become a little bit more open minded with who is being put in the spotlight.  People can say what they want about ratings and who is champion but it wouldn’t matter if it was Rollins or Owen as champion. During NFL season the ratings suck all around but that doesn’t mean they shouldn’t put in the effort. I feel like these two put in a good effort but no one will care because everyone cares too much about the viewership of Raw. Owens kept the gold but they sure made an interesting story out of Jericho’s interference. Clash of Champions was a solid pay-per-view and I will give it 7 out of 10. I think Styles vs. Ambrose was better then Owens vs. Rollins. Next up for Raw is Hell in a Cell on October 30th. They have a lot to build on but also a lot to improve on. Tonight was about the champion but in 5 weeks it will be about hell inside Hell in a Cell!