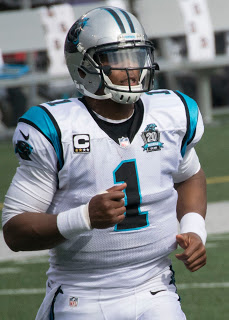 This past February at Super Bowl when the Carolina Panthers faced off against the Denver Broncos many people thought that this was an easy win for the Panthers. After all they went 15-1, set a lot of records and were healthy on both sides of the ball. The Broncos hobbled their way into the playoffs with a Quarterback who was a shell of himself when he was in his prime. However the Broncos defense did what no one else had done all of last season. They got to Cam and got to Cam Newton early. I truly believe after the first half the Cam gave up. All of his life he’s been about winning, performing under pressure, and putting his teams in a position to win got the better of him. He won the Heisman, won a National Champion, and did a lot of great stuff leading up to Super Bowl 50. I thought this loss would have motivated him to come and shred teams more so then last year but that has not happened.

The first regular season game of the year was a rematch of the Super Bowl against none other Denver Broncos. The Quarterbacks had changed but the defense for Denver remained intact if not better then before. Cam took some brutal hits some of which were very questionable. In the first half, Cam and the Panthers looked like they were going to steamroll right through Denver but it wasn’t so. The 2nd half Cam looked like he had no confidence, no control and he did not look like the Cam Newton of 2015. The Broncos ended up winning by one point and I believe this loss triggered everything Cam went through in the Super Bowl.

Here we are at the end of week four. The Panthers are 1-3, having been dominated by the Vikings and Falcons. Cam has lost control of his team, and now has a concussion due to poor decision making with the football. For me it goes back to February and week one against the Broncos. I think teams watched what the Broncos did to him and they are taking notes. If Cam is going to be the fierce leader he was last year he needs to make adjustments, quit worrying about his image and focus on football. I know there is pressure from the media and fans to take a stance on social issues and be a political activist but he’s not being paid to do those things. He’s paid to be a great football player and right now he’s not playing great. The past is the past and that’s where Cam needs to leave it. Quit worrying about the games you lost and worry about the ones you need to win.

If the Panthers are going to be contenders again then Cam needs to step up and play with no fear like he did last year. If he can get his confidence, his swagger and his fierceness back then the Panthers could be legit contenders for the next several years. If Cam chooses to play the way he has and make poor decisions with the football then the Panthers will continue to be the mediocre team that they have been in the first four games of this season. Only time will tell to see what Cam Newton we will get.