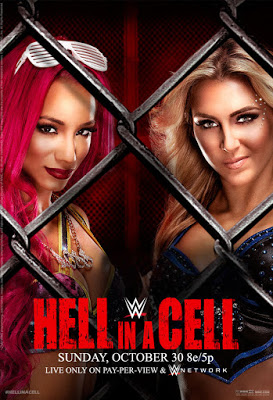 Tonight was the annual Hell in a Cell event for WWE. It was promoted as a triple main event due to three matches being inside the demonic structure. On paper this looked far better then No Mercy a couple of weeks ago but could this highly promoted pay-per-view live up to the hype? Before I begin with my thoughts here are the results of WWE Hell in a Cell
-Pre-show: Cedric Alexander/Lince Dorado/Sin Cara defeated Tony Nese/Drew Gulak/Ariya Daivari
-Roman Reigns defeated Rusev to retain the WWE United States Title
-Bayley defeated Dana Brooke
-Karl Anderson/Luke Gallows defeated Enzo/Big Cass
-Kevin Owens defeated Seth Rollins to retain the WWE Universal Championship
-The Brian Kendrick defeated TJ Perkins to win the WWE Cruiserweight Championship
-Cesaro/Sheamus defeated The New Day by DQ, New Day retains the Tag Team Championships
-Charlotte defeated Sasha Banks to win the WWE Women’s Championship

The show opened up with the United States Championship match inside the Cell. Reigns and Rusev have had two physical encounters prior to this and they both were really funny to watch. It’s hard getting into the cell matches because they can’t be as violent as they use to be. This was a normal match for them but just inside the cell. Nothing really stood out to me except for a couple of kendo shots, and a steel chain being used. Another disappointment lately has been Dana Brooke and Bayley and their feud. Dana has made a lot of mental errors and she needs more work before she’s going to get to the elite level.

One thing that’s not disappointing is the energy and the mic skills of Enzo and Big Cass. They are so entertaining. It’s a good mesh of how serious Gallows and Anderson are. In my opinion this would be a great Wrestlemania feud if it was done right. I think right now they are holding Enzo and Cass back until Wrestlemania season so they can to do something big at Wrestlemania 33. From a wrestling standpoint The Club is great and from an entertainment standpoint Enzo and Big Cass are great, The second Hell in a  Cell match was for the WWE Universal Championship, This match was way better then first cell match of the night. This match had some decent brutality for a PG Hell in a Cell match. Two referees got injured, Chris Jericho interferes and Kevin Owens went through two tables. What more could you ask for in a modern day Cell match?

I really enjoy the fact that there was a story behind the WWE Cruiserweight Championship match. A lot of people think the Cruiserweight Division has no character and no stories. This matched proved that those statements couldn’t be further from the truth. I love the match that Kendrick and Perkins had because of their history and the fact Kendrick is getting his redemption. Speaking of interesting stories I think the team of Sheamus and Cesaro has been very interesting. As someone said they are Team Hell No 2.0 and it’s a big thing to fill. I say that because I don’t think anyone will ever top Kane and Daniel Bryan in terms of odd couple tag teams. I love that they didn’t totally job out Sheamus and Cesaro and made them look strong.

The Main Event tonight was history in the making. It was the first time in WWE history that two women have been the main event of a pay-per-view and the first time two women have been inside the Hell in a Cell. I was very intrigued, interested and concerned how this match was going to go down. Hell in a Cell has made and broken careers over the last twenty years so could they live up to the hype? This match started out fast pace and then Charlotte powerbombed Sasha through a table and it seemed to be legitimately hurt. If she’s legit hurt then she has a lot of guts going through with this match. If she’s not hurt then that’s the best selling of an injury I’ve seen in a long time. As much as I respect the women of WWE I wasn’t sure if this is the type of match they should have made history in because the problem is that Rollins and Owens kind of set the bar earlier in the night. I almost would have much rather seen a Ladder Match out of the women. The match was decent but I hate the booking of the rivalry right now. Sasha can only win the title on TV but is not good enough to keep it on a pay-per-view? I really don’t know what they are doing with this division but right now it’s not good. Sasha and Charlotte did endure a lot of punishment so I will give them a ton of credit for what they went through tonight. I’d have to give the Hell in a Cell show a 6.5 out of 10. Smackdown continues to deliver the better matches and stories. Next pay-per-view we get to see Raw vs. Smackdown at Survivor Series. Reigns, Owens and Charlotte survived tonight but in three weeks time who will survive at Survivor Series?