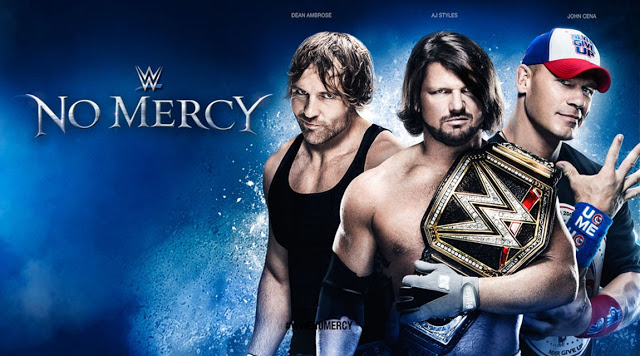 Tonight for the first time in a long time the WWE Championship was not the Main Event of a solo brand Pay-Per-View. It also marked the first time in history that the WWE Championship Match was the first match on the card. The reason for the changes is due to the Sunday Night Football game and the Presidential Debate. I was very curious to see how this would come across after I heard this news. Before I get into on how the show went here are the results of the return of No Mercy.

Tonight’s show kicked off with the what is usually the main event of a show. AJ Styles defended the WWE Championship against Dean Ambrose and John Cena. This was an incredible match to open a show. I guess it’s a good idea it went on first because this was too good of match to be missed for the Presidential Election. The heck with Clinton and Trump. Styles, Ambrose and Cena had a better battle tonight. Styles retains and proves why he is more phenomenal then anyone on the roster or any presidential candidate. How do you follow a WWE Title Match? John Cena;s girlfriend Nikki Bella took on Carmella in a feud that’s been highly entertaining. Carmella has been great as a heel considering she wasn’t getting over as a face. I think Carmella has a great future in the women’s division but for now Nikki Bella is still the woman.

When it comes to faces of divisions The Uso’s have been the face of the division for quite some time. Even though they haven’t had the tag titles in quite sometime they are one of the best teams to ever come around. I was actually very surprised to see Heath Slater and Rhyno retain the titles. The other thing that was surprising is the great chemistry between Baron Corbin and Jack Swagger. Both are great athletes in their own right. I hope to see more of Swagger and Corbin in the future. Speaking of futures it’s great to see that the dirtsheets were wrong and Dolph Ziggler is the new Intercontinental Champion. This is definitely a match of the year candidate. Usually the best of friends have the best chemistry and The Miz and Dolph Ziggler are no different. Even though they are no Shawn Michaels and Triple they are the closest thing to what they were in this generation of WWE.

One thing that obviously disappointing was the fact that Becky Lynch was injured and couldn’t compete against Alexa Bliss. Naomi ended up being Alexa’s opponent. They had a solid little match but I thought it was a bad booking decision to have your number contender lose a match considering the champion wasn’t there. Another booking decision that I question is putting on Bray Wyatt and Randy Orton on last. The last image of No Mercy should have been Dolph Ziggler holding the IC Championship high and celebrating the crowd.

Smackdown has been the better show with better matches and stories. Their pay-per-view and TV show consistently keep moving and are not as drawn out as Raw usually is. I got to give this pay per view an 8 out of 10 because of World Title match and Intercontinental Title match. All the title matches on Smackdown have been great as of late. With that being said lets see what Raw does in three weeks for Hell in a Cell!