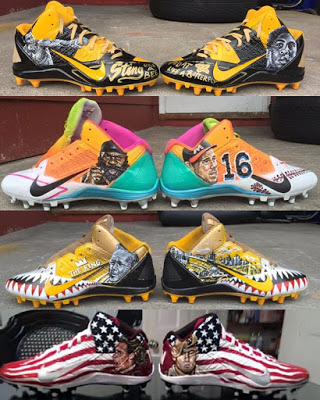 At the end of the season I have no doubt that many people will be talking about the rookie seasons of Dak Prescott, Ezekiel Elliott and the comeback of Tom Brady. Another thing people will be talking about is the the political crap that hurt the NFL in such a way that the ratings have been the worst they have been in years. What people should be talking about is the humility and respect that Antonio Brown has shown this season. Instead of expressing himself negatively he found ways to express himself positively. In a year where so many players have been negative, disrespectful and self absorbed Brown decided to take a positive route even if it meant being fined or removed from a game.

This year Antonio Brown has worn cleats honoring his children, Muhammad Ali, Kimbo Slice, Jose Fernandez, Arnold Palmer and Pat Tillman. A fine for violating the NFL uniform policy is a maximum of $9,115. Considering Brown is under a 5 year, $41,960,000 contract I am guessing that’s pocket change for him. The fact that the NFL will allow players to kneel during the National Anthem but give Brown a hard time about honoring athletes who passed away is absurd and ridiculous. The problem with the NFL and now the NBA needs to allow it’s team and players a little more freedom when it comes to paying respect towards others. It’s not like they altered the helmet or the jersey. They are shoes and they are not disrespecting the team that Brown plays. If the Steelers had an issue with it then I might be able to understand that but it’s just the NFL trying to act tough and play favorites. I think the NFL needs to leave what a player wears on his feet up to the individual team.

With just a few weeks left in the NFL I will be curious to see what else Antonio Brown does with his cleats. It’s been fun watching him defy the league.  I personally would love to see him get duplicates of each tribute cleat and give them to the families of the athletes he paid tribute to. When I look back on the 2016 NFL Season I will remember what two Dallas Cowboys rookies did, I will try forget how disrespectful certain players were and I will remember how cool it was that Antonio Brown gave respect to athletes of different sports and acknowledged how great their accomplishments were! I hope more athletes in the future will pay homage to the legends before them and express who influenced them. Antonio Brown thank you for your humility and making us all aware that athletes can have a powerful and positive influence on someone if they use their status in the right way.