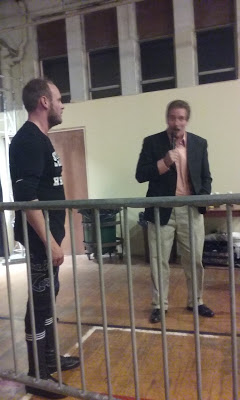 On Saturday November 19th, I traveled down to Coldwater Michigan to see the re-birth, re-debut and  re-establishment of Price of Glory Wrestling. It was also the return of the Glory Cup Tournament. I was expecting a good show and some solid matches, but what I got was so much more. Before I begin with my thoughts on the evening here are the results of POG Glorified:

-1st Round Match: Sean Tyler defeated Officer Rod Street
-1st Round Match: Noah Lott defeated Ames
-1st Round Match: Chase Matthews defeated Dollar
-Battle Royal: Final Four were Jack Thriller, Fabuzio, BAM, Johnny Dynamo
-Fatal Four Way: Jack Thriller defeated Fabuzio, BAM, and Johnny Dynamo
-Semi Finals: Chase Matthews defeated Noah Lott
-Semi Finals: Louis Lyndon defeated Sean Tyler
-Tag Team Title Match: Jack Verville/Jimmy Shawlin defeated Project Max by DQ to be declared the POG Tag Team Champions
-Finals: Louis Lyndon defeated Chase Matthews and Jack Thriller to win 2016 Glory Cup Tournament and become the new POG Heavyweight Champion
The night started off with the POG Hall of Fame Induction Ceremony. The first three inductees were Keith Creame, Christian Abel and the “Alpha Male” Monty Brown. Brown cut an epic promo saying he was far from retired. The action kicked off with Louis Lyndon and Maltese Tiger. This was a fast pace match that had a lot of amazing action. I’ve been watching Louis Lyndon for awhile now so I was pretty happy to see him move on in the first round. When I think of over the top characters I have to put Officer Rod Street in that same category. His crew of The Police really took it to Sean Tyler before and after the match. No matter how hard Office Rod tried it wasn’t enough for him to get by Sean Tyler
In the beginning of the night, Noah Lott was introduced as the Professional Operations Supervisor. I wondered if he would abuse and use his power in this tournament and he sure did in his match against Ames. He took every shortcut possible to move on in the first round. One match that intrigued me going in was Chase Matthew and $Dollar$. Both men have had a storied past in POG, so I thought for sure there was going to be bad blood. At one point in the match Dollar’s former tag team partner Noah Lott made his way to the ring to try get him an advantage. Dollar wanted no part of it, but in the the slight distractions by Noah Lott ended up costing Dollar the match. Even after the match Lott attacked Matthews to try and gain an advantage into the next round
This year there was a third participant in the Glory Cup Finals and it was determined by a Battle Royal but there was a twist. The final four men in the match would move on to a one fall fatal four way match to determine a spot in the finals. The final four were Fabuzio, BAM, Johnny Dynamo and Jack Thriller. These four have poured their heart and soul into POG over the years, so it was only fitting they competed for the third spot. In the end, it was Jack Thriller who got the victory and a chance to compete for the POG Glory Cup. In the first semi final match Chase Matthews finally put an end to the threat of Noah Lott for the night much to the delight of the crowd. Noah Lott tried to shortcut his way again, but this time Matthews would have none of it. In the second semi final match the injuries to Sean Tyler would catch up to him as Louis Lyndon secured a spot into the finals.
Before the Glory Cup Finals there was a match to determine the POG Tag Team Championship. It was scheduled to be Pretty Nifty versus The Popular Electronics. Mr. Nifty was unable to compete due to injury. Jack Verville proposed a one on one match but Max Morrison would have none of it. From the start of the match Morrison and his partner Jimmy Shawlin were fighting about everything. At one point in the match Shawlin walked out on Morrison, but was the attacked by members of Project Max. It was now a 3 on 1 match with odds seemingly against Verville. However we would see that Jimmy Shawlin had a heart and put himself in Verville’s corner. Morrison eventually got frustrated with this move and got himself disqualified. As a result of these actions the Tag Team Championships were awarded to Jack Verville and Jimmy Shawlin. I guess going forward they are going to be “Pretty Hype.”
Little did I know in the beginning of the night that the winner of the Glory Cup Tournament would be getting more then a trophy. It was announced that the winner of the tournament would also become the new POG Heavyweight Champion. Louis Lyndon, Chase Matthews and Jack Thriller all showed respect for each other and the fans before the match began. These three were having a classic match until once again Noah Lott interfered and influenced the outcome of the match. If you would have told me that he had Louis Lyndon in his back pocket I would have called you crazy. Noah Lott had help from Fabuzio and one of Rod Street’s Officers to screw over Matthews and Thriller. The crowd was furious and Dan Severn was none to happy either. Once the match was over Dollar returned to aide Chase Matthews and threw down a challenge for the next show. At the next show it will be Dollar, Chase Matthews and Jack Thriller taking on Noah Lott and two partners of his choosing. Even though Noah Lott has the power he ultimately still answers to Dan Severn who made the match official.
This show was so fun and incredible to be a part of. My Fantastic Four Performances of the night go to Louis Lyndon, Chase Matthews, Jimmy Shawlin and Noah Lott. I am so glad I made the trip down to Coldwater to see the resurrection of Price of Glory Wrestling. For more info on Price of Glory go to https://www.facebook.com/POGwrestling/
Please Share This