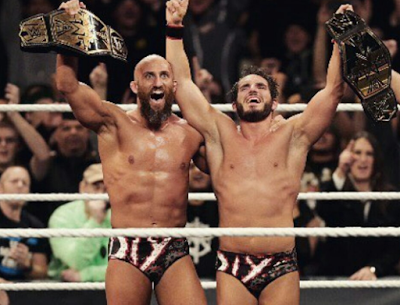 On Saturday night, the night before Survivor Series NXT invaded Toronto as part of a huge wrestling weekend for WWE. Every Takeover has been special and has always set the bar for the events of a huge weekend like this. Before I begin with my thoughts here the results from Takeover:
-Bobby Roode defeated Tye Dillinger
-The Authors of Pain defeated TM-61 to win the Dusty Rhodes Tag Team Classic
-DIY defeated The Revival in a 2 out of 3 Falls Match to win the NXT Tag Team Championships
-Asuka defeated Mickie James to retain the NXT Women’s Championship
-Samoa Joe defeated Shinsuke Nakamura to win the NXT Championship
The first match of the night was two Canadians taking on each other and that was Bobby Roode and Tye Dillinger. This was a awesome match for Tye Dillinger. I think he’s proven he can hang with the best. He has definitely overcome a lot in his career. Even though Roode won the match I truly believe this match elevated Dillinger in a great way. This was followed up by the Finals of the Dusty Rhodes Classic. Both teams in this match are fairly new regulars to NXT so it was great to see some new blood get the spotlight. It was no surprise to me that the Authors of Pain won but TM-61 is going to be a great tag team for the future. I believe both teams will eventually contend and compete for the NXT Tag Titles by the time it’s all said and done.
We go from one tag team match to another. This one was for the NXT Tag Titles between DIY and The Revival. When they faced off in Brooklyn it was one of the absolute best tag team matches I have ever seen. Soon after that Ciampa and Gargano faced off in the Cruiserweight Classic and proved they can be the best match on the card whether it be in singles or tag team competition.This match was incredible and it lived up to the standards they set in Brooklyn. I am so happy for DIY and the run they have been on together. When it comes to incredible runs no one has had the run that Asuka has had since she’s been in NXT. Tonight she faced her biggest test in Mickie James. I was shocked on how well Mickie James performed. It’s been six year since she’s been in a WWE ring and she looked great. This was a great match for Asuka because she has not been tested whatsoever. She was tested tonight and she earned every bit of the victory.
The Main Event was for the NXT Championship which featured Samoa Joe trying to recapture the NXT Championship from Shinsuke Nakamura. These two had a great match in Brooklyn and they have been at each others throats since then. Nakamura had an epic entrance but I was surprised how well Samoa Joe was received by the crowd. This match was hard hitting, fast paced and completely insane. I am absolutely shocked that Samoa Joe has become the first two time NXT Champion. I honestly didn’t see that coming. It makes you wonder who is going up and who is staying down. I will be very curious to see how this all plays out. With that being said I will give NXT Takeover Toronto an 8.5 out of 10. The crowd was electric as always, and the matches were very very solid. Everyone tonight should be proud if what they did tonight! All I got to say is good luck to Survivor Series. They are going to need it after what we saw at NXT Takeover Toronto!
Please Share This