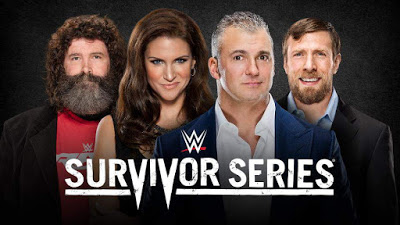 Tonight was the 30th Annual Survivor Series and for the first time in 11 years we saw Raw taking on Smackdown to find out who was the better brand. I haven’t been really excited for a pay per view in a long time but something about this show really had my blood pumping.
-Pre-Show: Rich Swann/TJ Perkins/Noam Dar vs. Ariya Daivari/Drew Gulak/Tony Nese
-Pre-Show: Kane defeated Luke Harper

The show started off with the 5 on 5 Women’s Elimination Tag Match. Before the match started Nikki Bella was attacked backstage and therefore Natalya replaced Nikki in the tag match. I’ll be curious in weeks to come to see if it was Carmella or Natalya that took Nikki out. Even though she got eliminated I have to say the star of the match was Nia Jax. She showed her force and her power during this match. It was great to see both divisions interact with each other. It goes to show you that both women’s divisions have something special about them. Next up was for the Intercontinental Championship between The Miz and Sami Zayn. I was really hoping for a Zayn-Ziggler match but we got stuck with the C+ player in The Miz. I love how weak they made have made The Miz because he is weak. I really think the Maryse thing is getting old and needs to be done. It’s time to bring prestige back to the Intercontinental Title and have it not be used for a sissy storyline.

It was cool to see WWE go back to what they did in the first two Survivor Series. They had a 20 man tag team match featuring 5 tag teams from each side. I wasn’t surprised that Breezango got eliminated right away but I was really shocked that The New Day was eliminated right away. This was a great match. I was really shocked that it came down to The Uso’s and the team Cesaro and Sheamus. I was even more shocked that Cesaro and Sheamus won the match. Raw continued their momentum by keeping the Cruiserweight Division on Raw even thought the way it happened was completely stupid. Baron Corbin was suppose to be “injured” and they blew that storyline. I feel like the powers to be are really sticking it to the dirt sheets with the how they went with the show.

With Raw heading into the final elimination tag team match with a lot of momentum I wondered how this match would go. Both teams are stacked and loaded with talent. It reminded me a lot of the WWE vs. Alliance Tag Team Match at Survivor Series in 2001. This match had a ton of carnage and even saw James Ellsworth get revenge on Braun Strowman. Braun absolutely destroyed Ellsworth afte the elimination but it was cool to see it come full circle. I am not sure how I feel about seeing Owens get eliminated as early as he did. I felt if you wanted to make both brands strong you have your champions at the end of the match. The match was just pure chaos and had some crazy spots including Shane McMahon. He took a vicious spear from Roman Reigns after diving through a table earlier in the match. When you didn’t think things get any crazier Dean Ambrose came out after he was eliminated to reform The Shield and take out AJ Styles. This match was as wild as could be and I think it saved the pay-per-view a little bit. Even though it was predictable the action made up for the predictability.

The Main Event was almost 13 years in the making. Brock Lesnar and Goldberg faced each other at Wrestlemania 20 and it was complete garbage. They both left the company in such a negative way they didn’t care about putting on a great match. I don’t know what the terms were and who got paid so much money but the fact Goldberg beat Lesnar within 2 minutes. I am shocked and I am not sure what the story is here. It left me and many others in complete shock. For being a “Big Four” pay-per-view the WWE almost dropped the ball on this pay-per-view, The fact that Raw went up 2-0 in the elimination tag team matches made it so predictable that Smackdown was going to win the last elimination tag match. They made up for it by screwing over the dirt sheets and rumor mills with the Intercontinental Title Match, the Cruiserweight Title Match, and Goldberg versus Lesnar. At the end of the day I am going to give Survivor Series a 7.5 out of 10. We had plenty of shock at the end and very few people who survived.