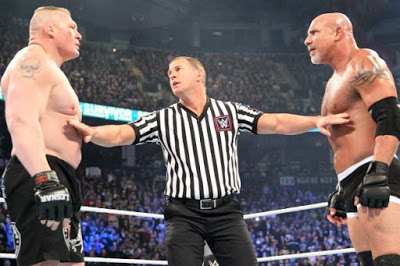 At Survivor Series 2016 we witnessed a shocking turn of events when Goldberg returned to defeat Brock Lesnar in 86 seconds. It was very epic, jaw dropping and left some perplexed and dumbfounded. There were a lot of different reactions, theories and thoughts about how and why this match went down. I am going to examine everything about this decision because there are lot of things to look at.
First and foremost you have to look at friendship and money. It is no secret that Lesnar and Goldberg are very good friends outside of the ring and off camera. When they left in 2004 they left together and purposely put on one of the worst matches in Wrestlemania history. Brock Lesnar is all about making money. Goldberg is all about making money.  I do have a feeling even though it’s being speculated that Lesnar wanted the match to go the way it did; he probably got paid a lot of money to lose in the fashion that he did. Lesnar is about money, image and legacy so I think it took a lot of convincing from WWE’s wallet to lose the quickly. I also think Lesnar see’s a bigger picture in the fact that Goldberg is also a draw and he can make tons of money which is why I was not surprised to hear Goldberg signed an extension with WWE. I am not a big fan of either one because they have been very vocal in the past that they are in the business for the money and not because they care about it.
The one thing I question is the mentality of WWE basically saying no in their prime on our roster can beat Lesnar but a 50 year old man who hasn’t wrestled in 12 years can beat him in 86 seconds. This is basically saying guys like CM Punk, John Cena, Randy Orton, Roman Reigns and Seth Rollins aren’t good enough to beat Lesnar. It also makes me question now why The Undertaker’s streak was broken. WWE doesn’t think of the long term implications of certain things and this is potentially one of them. I am scratching my head thinking to myself that the biggest cornerstone in WWE History had his legendary streak ended by a guy who lost in 86 seconds. Everything Lesnar did after Wrestlemania 30 was rooted back to the fact that ended the most legendary career in sports entertainment history. You also have to question why they would make a man who dominated in the UFC lose to a guy who hasn’t seen any form of competition in over a decade. Lesnar recently fought in the UFC again back in July and won. Despite him testing positive for banned substance he dominated Mark Hunt in a one sided fight. So a guy who can dominate in real fighting and has been presented to be dominate in scripted fighting lost to a guy 86 seconds. I can see why some are truly upset.
When I think of Goldberg I think of his WCW days. He finished people off in a quick fashion. I think WWE has learned from it’s failures and it’s successes over the last two years. I think WWE realized that they failed Sting. Even though Sting had a great match against Triple H at Wrestlemania 31, he lost both pay-per-view matches he was involved with. I think this put a little dent into Sting’s legacy because of their pride. Sting was always WCW and TNA loyal in his career. What should have happened is Sting should have beaten Triple H then kept it where Rollins beat Sting. This would have advanced Rollins character and persona by using his victory over Sting as a way to better himself then Triple H. In the last 10 months, WWE has learned from it successes by putting AJ Styles where he is right now. AJ Styles is a non-WWE made star. It was mentioned on a few podcasts that Vince McMahon was going to keep Styles as a mid-carder and did not realize what type of performer he had. The powers to be realized how great AJ Styles is and they decided to put him in the spotlight. I think WWE realizes that the fans loved a lot of non-WWE made stars. They love CM Punk, Daniel Bryan, Cesaro, Seth Rollins, Samoa Joe, Nakamura and Bobby Roode. Triple H realizes what the fans want. I think Triple H, Brock Lesnar and a few other realized people didn’t want to see the WWE version of Goldberg. They wanted to see the destroyer, bulldozer and the man who annihilated  people when he was in WCW.
Those of us on the outside will never the money aspect, the creative thinking or why things went down they way they did at Survivor Series. I think the moment made for live shocking television whether people love it or hate it. I also think this was creative and the wrestlers finally sticking it to the dirtsheets, rumors mills and the IWC. WWE has gotten a bad reputation for being “predictable.” The finish of Survivor Series was anything but predictable. In the future, WWE does need to look at long term effects on their decision making but at the same time looking at what their fans want. Whether you love it, hate it or are indifferent about it what’s done is done. The question now is not only is what’s next but who’s next for Goldberg?
Please Share This