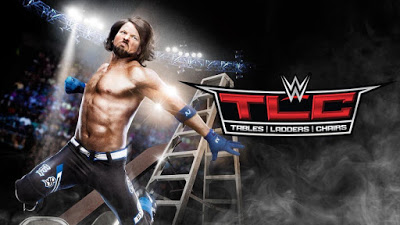 Tonight was the annual Tables, Ladders and Chairs event for WWE and it was a Smackdown only pay-per-view. All of the matches that were announced and all of them had significance. Going into tonight all of the Smackdown Championships were on the line and it would definitely change the landscape going into 2017. Before I begin with my thought here are the results of WWE TLC:
-PreShow: American Alpha/Hype Bros/Apollo Crews defeated The Vaudevillians/The Ascension/Curt Hawkins
-Bray Wyatt/Randy Orton defeated Heath Slater/Rhyno to become the new WWE Smackdown Tag Team Champions
-Nikki Bella defeated Carmella in a NO DQ Match
-The Miz defeated Dolph Ziggler in a Ladder Match to retain the Intercontinental Champion
-Baron Corbin defeated Kalisto in a Chairs Match
-Alexa Bliss defeated Becky Lynch in a Tables Match to become the new Smackdown Women’s Champion
-AJ Styles defeated Dean Ambrose in a TLC Match to retain the WWE World Championship
The opening match of the night was WWE Smackdown Tag Team Title match. This match odd and weird all over it. Rhyno and Heath Slater took on Bray Wyatt and Randy Orton. I am glad that Heath Slater has been able to be in the spotlight but at the same time I think the teaming of Bray Wyatt and Randy Orton has been genius and good for both of their careers. It’s nice to see Bray Wyatt finally get a Championship on his resume. It’s been long overdue and well deserved for the Bray. I don’t like the fact that Nikki Bella and Carmella was No DQ but has count outs. I really thought that limited what they could do. I also thought that it was hard to live up to the NO DQ match that took place on Raw between Sasha Bank and Charlotte. Hopefully the women of Smackdown won’t be upstaged by Raw again and get some more opportunities in the future to prove themselves.
When it comes the Intercontinental Championship, the rivalry between The Miz and Dolph Ziggler has really brought back the title to the forefront. I really enjoyed the storytelling and psychology of the match. You don’t see great storytelling like that too often anymore. These two have mastered it and have done it very well. This was a really great ladder match for this era. I wonder where Ziggler goes from here because the feud has ran it’s course. Speaking of feuds running their course I think Smackdown needs to move on from Kalisto and Baron Corbin. I think Kalisto needs to be on Raw with the Cruiserweight Division. They had a really good match and it was very fun to watch but I just think Kalisto would be better off as a Cruiserweight. All feeling aside they made some great use of the chairs in this match and all of it looked like it hurt. They also exceeded my expectations for the match because it went way better then I thought it would.
The first women’s match was kind of disappointing so I was really hoping for a great Tables Match between Alexa Bliss and Becky Lynch. This match was really good. It was better then the NO DQ match and it came pretty close to being better then Sasha Banks and Charlotte’s match from Monday. I think the women of Smackdown get a lot more opportunities then the women of Raw. Having two matches on a pay-per-view really drove that point home tonight. On Raw, it’s all about two women. On Smackdown, it’s about all of them women. On Smackdown, it’s been all about AJ Styles and Dean Ambrose the last few months. They have had a great story that’s included the improbable story of James Ellsworth. Dean Ambrose is crazy and Styles is an awesome performer which is why I knew a TLC match would be great for them. This was a phenomenal match and it played into how intense this rivalry has been. My friend predicted that James Ellsworth would cost Ambrose the match and he was right. It was a crazy ending to a crazy match.
This was a really good pay-per-view. I feel like Smackdown has the better stories which makes for a better overall pay-per-view. I hope Raw took notes because they have a lot to live up to at Roadblock. I am going to give TLC at 7 out of 10. I thought all the matches were solid and overall the show was solid. Next up is Roadblock in two weeks and again the Raw brand has a lot to live up to.
Please Share This