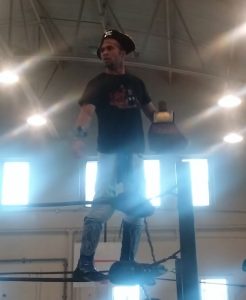 Back in the early days of Price of Glory Wrestling there was the Jack Thriller Invitational where he would take on three opponents in one night to prove he was the best and that he was dominant champion. On March 25th, POG Heavyweight Champion Louis Lyndon decided to follow in Thriller’s footsteps and do the same. After all the show Enter the Dragon was named after him. On a Saturday Night Coldwater the fans found out what kind of champion Louis Lyndon is. Before I begin my thoughts here are the results of POG Enter the Dragon:

At Moment of Truth F.I.A. had some disrespectful remarks about Dan Severn which didn’t sit to well with manager. His punishment was taking on Jack Thriller. They had a really solid match the get the crowd going. Jack Thriller has always been larger then life in Coldwater and F.I.A. is one of the best characters in Michigan these days. So many can hate what his character stands for which makes so fun to watch. Two past POG stars Mike White and Idol Heinze had a really competitive match that saw Mike White using his high flying tactics to get the victory. I have not seen Mike White since his days as Unr8ted but he and Heinze proved with a doubt they belong in POG.  The long standing rivalry between BAM and Fabuzio had to wait because Professional Operations Supervisor Noah Lott said Fabuzio was injured. As Noah Lott was distracting BAM out came Roger Lanier from behind to gain the early advantage on BAM. Even though Lanier got a jump start BAM ended up hitting his famous moonsault for the victory. I suspect that we will see BAM vs. Fabuzio very soon.

One of the great things I love about Price of Glory Wrestling is the newly formed Trios Division. At the top of the division is Project Max. Max has his troops on a mission to destroy any three competitors that come their way. At this show they took and The Bomb Shelter that featured a female by the name of Randi West. Randi showed that she is not a woman to be messed with, and hopefully The Bomb Shelter will be back to get another shot at the POG Trios Titles. In the other trios action Hometown Diesel(Jack Verville, Jimmy Shawlin and Sean Tyler) took The Police Department. I must say that The Police Department is the most over the top stable that I’ve seen in recent years. They know how to bring it with their entrance, attitude and in ring work. I am waiting for the day they get their hands on those POG Trios Titles.

Louis Lyndon said he would take on all comers to prove he was the best POG Champion ever. He took on BD Smooth, Brian McFeters and Kip Mackey. He defeated them all in very quick fashion which left Dan Severn very unhappy. $Dollar$ came out and confront his former tag team partner Noah Lott about his abuse of power. He then revealed that Dan Severn gave him equal amount of control as Noah Lott has and then put that power to use. Severn and $Dollar$ brought out The Maltese Tiger which was more then enough competition for the champion. There multiple times Tiger had that match in his favor but there was constant interference from Noah Lott. This allowed Lyndon to win that match and retain his title. Unhappy with the results of the night $Dollar$ suspended Louis Lyndon from the May 27th show and made two major announcements. The first announcement is that on May 27th Noah Lott will be taking on The Maltese Tiger in a strap match where the loser will get whipped with the strap. The second announcement is that on July 15th the POG Heavyweight Champion Louis Lyndon will be defending his title against “The Franchise” Shane Douglas.

That announcement capped off an awesome night of wrestling action. Price of Glory Wrestling is headed in a great direction and is a promotion that is must see. If you’re in the Coldwater area and beyond I would definitely recommend coming out to a show. It is well worth the trip and time. For more info on the May 27th and July 15th show go to https://www.facebook.com/POGwrestling/

Posted by Hollywood's World of Sports on Saturday, March 25, 2017