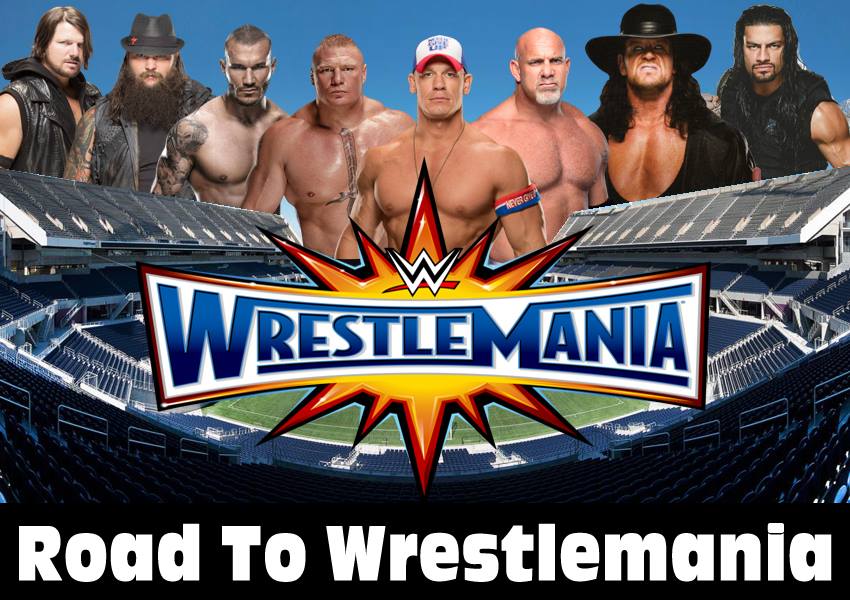 This week on the Road to Wrestlemania proclamations were made and more matches were determined. Monday Night Raw started off with Paul Heyman promising that Brock Lesnar would put down Goldberg at Wrestlemania once and for all. Another feud brewing is that of Kevin Owens and Chris Jericho. The fact that they were so entertaining for so long together makes the rivalry that much better. I think the team of Kevin Owens and Samoa Joe are going to be very hard to beat as long as their under the guidance of Triple H. Speaking of Triple H, he came out to confront Mick Foley after Foley was involved in a war of words with Stephanie. This led to Foley giving Triple H a taste of Mr. Socko but before he could some serious damage Stephanie hit him with a low blow. As Triple H was getting to ready to attack Foley he was interrupted by Seth Rollins. Triple H and Rollins got into a brawl that went Rollins way at first. Triple H gained the upper-hand and left Rollins laying to end Raw.

Smackdown was absolutely volatile this week. AJ Styles has been upset after he lost his spot in the Wrestlemania Main Event. He argued with Shane McMahon last week but this week was completely different. Styles waited for Shane to the arena and unleashed a horrifying attack on him. It resulted in Daniel Bryan firing Styles and having him escorted out of the building. By the end of the night Shane came out and said that he will face AJ Styles at Wrestlemania. That was one of many stories that took place throughout the night. The two power couples of WWE will be squaring off as John Cena with Nikki Bella will be against The Miz with his wife Maryse. A lot of people think this is a terrible idea but I think The Miz and John Cena feud really never got the length or credit it should have back in 2011. At the end of Smackdown Bray Wyatt delivered an eerie message to Randy Orton as a result of the Wyatt Compound being burnt to the ground a few weeks ago. I feel like there wasn’t much action on Smackdown this week but sometimes it’s better to build strong stories then it is to have meaningless matches.

The Cruiserweight Division got a clear picture of what Wrestlemania is going to look like for them. There was a 5 way elimination match to determine who would face Neville at Wrestlemania. The participants were TJ Perkins, Tony Nese, Akira Tozawa, The Brian Kendrick and Austin Aries. All of them are deserving to be in the Cruiserweight Title Match but it was Aries who came out on top. I think this match is going to be a sleeper match. Many people are probably thinking this is a blow-off match but don’t be surprised if we are all talking about this match by the end of the night on April 2nd. The night before Wrestlemania is NXT Takeover Orlando. We now know that all three titles will be on the line. Ember Moon will be taking on Asuka in a match that is going to turn a lot of heads. It was announced that The Authors of Pain will take on both The Revival and DIY for the Tag Team Titles. Shinsuke Nakamura gets his long awaited rematch against Bobby Roode for the NXT Title which should be another classic. Roode had an awesome match against Kassius Ohno this week. I am glad they brought Ohno back but one has to wonder how long he’ll stay in NXT.  Ohno along with Roode, Nakamura, Asuka and The Revival would be a huge addition to a roster that has the lack of depth that it does. I think you’re going to see some major shakeups after Takeover and Wrestlemania. Until then the weekend is shaping up to be a great one. I personally cannot wait to see what happens in two weeks. Tune in next week to see what takes place on the Road to Wrestlemania!