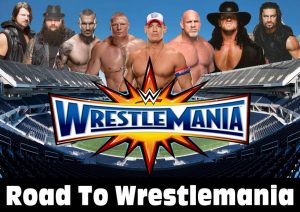 This week was the final week on the Road to Wrestlemania. There was a lot of defining moments this week that are going to lead to a special weekend.  On Monday Night Raw there was cryptic messages all night long from The Undertaker. He kept trying to get into the head of Roman Reigns but Reigns did not seem intimidated. The Undertaker was very old school with promo on Raw which leads me to believe that this Sunday will be the last time we see him in a wrestling ring. I truly believe that this is it for him. He has nothing left to prove and nothing left to gain from putting his body on the line anymore. When it comes to proving something I believe several stars have a lot to prove at Wrestlemania 33. I believe Seth Rollins has to prove that he is still the future of the company and beat Triple H. Bayley has to prove that she is not a paper champion and beat all the women on the Raw roster by herself. Then there is Sami Zayn who keeps going through hoops and hurdles to prove he is on the level that everyone thinks he is. The big story coming out of Raw is that the Triple Threat Tag Team Championship match is now a Ladder Match which is totally random. I think something big is going to happen in this match. I have my idea of what I think it is but I just want to wait and see what happens on Sunday.

Smackdown started off with the contract signing between AJ Styles and Shane McMahon. We now know that it will be a regular one on one match which many people are angry about. I am surprised there wasn’t more of a confrontation between the two but Smackdown seemed very lackluster. The two things that stuck out to me were Naomi returning in time for Wrestlemania and the final promo by Randy Orton to end Smackdown. I really love the storytelling Orton and Wyatt have done throughout this Wrestlemania season. It has been some of the best storytelling that two performers have done in years. For me personally this is the true Wrestlemania Main Event for the WWE Championship. One thing I am very disappointed about is that we won’t be seeing another classic match between American Alpha and The Uso’s. Both teams will be involved in the Andre the Giant Memorial Battle Royal which does nothing for the Smackdown Tag Team Division.

Only one important thing happened on 205 Live and that was the continued feud of The Brian Kendrick and Akira Tozawa. This should have been on the Wrestlemania Pre-Show and the Cruiserweight Championship should have been on the main card. I believe Austin Aries and Neville are going to tear the house down with their match at Wrestlemania and prove why 205 Live is a lot better then what people are giving it credit for. NXT wasn’t much better on building their part in Wrestlemania. The triple threat match that kicked off the show was the only thing that made sense going into this weekend. I guess some might say The Loser Leaves NXT Match made sense considering there are rumors that Elias Sampson is moving up to the main roster after Wrestlemania. Who else will come up from NXT after Wrestlemania? I guess we will have to wait and see.

The road has come to an end and the time is here to jump on the Ultimate Thrill Ride known as Wrestlemania 33. Legends will be made, careers may end and futures will be built. Check back this weekend for coverage on NXT Takeover Orlando and Wrestlemania 33.