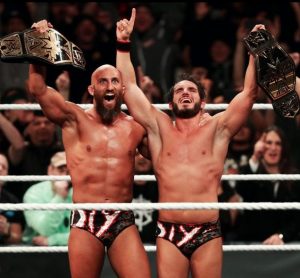 A few short weeks ago when the WWE Superstar Shakeup took place we saw stars switched brands, and NXT stars got called up. The Tag Team Divisions and Women’s Divisions both look complete different on each show now and it will make for new stories and matches. Two superstars who I was really surprised not to see were Tommaso Ciampa and Johnny Gargano. After losing the tag team titles back in January and not regaining them back during Wrestlemania weekend one has to wonder on what’s left for them to NXT? Right now NXT has The Authors of Pain, Sanity, Heavy Machinery, Ealy Brothers, and TM-61 when they come back from injury. Unless DIY is going to win back the NXT Tag Team Titles then they need to be moved up.

Gargano and Ciampa debuted in WWE in September 2015 and have had some incredible matches. They beat the live tar out of each other in Cruiserweight Classic and had some very classic matches with The Revival. They proved to be a hot commodity in two separate divisions which is why they need to be moved to Monday Night Raw. Gargano has has held titles in Chikara, DragonGate/Evolve, and AIW. Ciampa held the ROH TV Championship along with holding titles in multiple promotions. I bring up their resume because it is a resume that could make a huge difference on Monday Night Raw and 205 Live.

Currently 205 Live stars do not interact with the superstars on Monday Night Raw which is a huge mistake.  I believe that mistake is hurting the Cruiserweight Division and the 205 Live show. I believe DIY need to be on Raw to become the first two superstars to compete on 205 Live and against the stars of Monday Night Raw. DIY would be an excellent addition to the tag team division that already has The Hardy Boyz, The Club, The Revival, Sheamus/Cesaro and Big Cass/Enzo. I believe they could have some incredible matches with all of these teams and become a legit threat to the Raw Tag Team Championships. Everyone saw what they did in the Cruiserweight Classic against each other an proved that they would be a great addition to the Cruiserweight Division. Imagine if Gargano took on someone like Mustafa Ali, or Neville. How about if Ciampa took on someone like Austin Aries or TJ Perkins? These would all be incredible matches. The last scenario I had in my head is DIY being the Raw Tag Team Champions and feuding over the Cruiserweight Title at the same time. I remember when Dolph Ziggler was competing twice in one night for two separate championships. If he can pull it off then so can both members of DIY

If 205 Live is going to continue to survive it needs to start with DIY competing with the main stars on Raw. Once that proves to be successful then you have stars like Aries, Neville, Gallagher, Perkins and Nese competing against stars like Rollins, Ambrose, Cesaro, and Balor. How do you think the WCW Cruiserweight Division got successful? They started competing against top guys in WCW and were having great matches. One example was when Eddie Guerrero started wrestling Ric Flair for the WCW United States Championship. In fact, when Ric Flair had to vacate the United States Title in 96 it was Guerrero who a tournament to capture that belt. Who could forget Rey Mysterio becoming a multiple time WWE World Champion? The Cruiserweights have proven that they can hang with Main Event level talent and they need to be given that chance again. It’s just a matter of time before Gargano and Ciampa are on the main roster but when they get there how will the be used? If it were me put them in both division and let them run with it. Let them do it themselves and prove the critics wrong. Until then I will continue to enjoy their work on NXT.