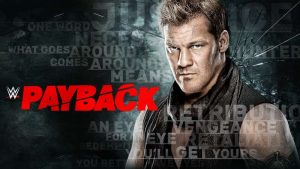 Tonight was the annual Payback pay-per-view for WWE and this is the first Raw brand pay-per-view since Wrestlemania. Going into the show some of the rivalries from Wrestlemania are concluding and the final match of Kevin Owens on Raw. My feeling going into this show is that it was some what of a “filler” show so they can do a reset to start building towards Summerslam. Before I start filling you with my thoughts here are the results of Payback:

The opening match of the evening was for the United States Championship between challenger Chris Jericho and champion Kevin Owens. I am not sure what to think of this whole “Face of America” persona that Kevin Owens is doing but he’s doing it well. I was really shocked that Jericho won the title considering he’s leaving this week or is he? I know his band Fozzy is touring again but did he work a deal with WWE to work the TV shows? I guess we will have to stay tuned to find out. We were gifted with another title match as Neville defended the Cruiserweight Title against Austin Aries. These two have been have some really great matches and making the Cruiserweight Division must see whenever they are on. Even though Aries won by DQ I think it’s just a matter of time before he hold that belt.

It seems like they wanted to get all the title matches out of the way because The Hardy Boyz were out to defend the Tag Team Championships against Cesaro and Sheamus. This was another hard hitting encounter and I love the chemistry between the two teams.  Even though the Hardy’s kept their titles my wish came true and Sheasaro turned heel. I think this will be good for them because The Revival are out of action and both are natural heels to begin with. Speaking of natural heels there is no one more natural at being heel these days then Alexa Bliss. It was easy for her tonight because Payback was in Bayley’s hometown of San Jose. Tonight was a typical WWE night because Alexa defeated Bayley to win the Women’s Championship in Bayley’s hometown.  Alexa is now the first woman ever to win the Raw and Smackdown Women’s Championships.

We go from the first half being all title matches to the House of Horrors match between WWE Champion Randy Orton and Bray Wyatt. This match was really weird and hard to follow. It ended up with Bray Wyatt leaving his house in a limo to the arena. While we were waiting for Orton and Wyatt to come back we had much anticipated Seth Rollins-Samoa Joe match. This was a really great match in which I saw a lot of things from Samoa Joe that I haven’t seen since TNA days. I love that WWE has turned him into a bad ass like use to be when he first arrived on the national scene. I also love the psychology that this match had with Rollins knee. I think this is going to be a long-term thing like it was with Shawn Michaels and his back.

The House of Horrors match continued as Bray Wyatt came back waiting on Orton. Orton showed from behind and got the upper hand on Wyatt for most of the time in arena. Surprisingly, Jinder Mahal and the Singh Brothers showed up to cost Orton the match. Even though it was a Raw show it was good to see them advance a storyline. This will definitely fuel the fire between Orton and Mahal heading into Backlash. The Main Event of Payback was none other then Roman Reigns and Braun Strowman. These two have had some really physical encounters and tonight was no different. For all you Roman Reigns haters he did a great job selling his injuries that were inflicted on him a few weeks ago. He did a much better job then his cousin The Rock did in 2002. If you need a little refresher back when they were building The Rock and Hogan for Wrestlemania 18 the n.W.o. ran down The Rock when he was in an ambulance with a semi-truck. One week later The Rock was back no selling the injuries. So for all of you fans who hate Roman Reigns really need to grow up and realize he is a great performer and deserves way better treatment then he gets. It was good to see Strowman built up like the monster he is. I really enjoyed the main event and the story behind it. I give Reigns a lot of props putting in the effort that he did because of what he’s went through emotionally the last few weeks.  The mayhem wasn’t done there. When Raw Talk started Strowman went after Reigns again but Reigns was able to fend him off.

I have to give Payback a 7.5 out of 10. The matches were really good and there were a few nice surprises. I also enjoyed how they kept the craziness going even after the pay-per-view ended.  For the first time since the WWE Draft I think Smackdown is going to have a tough time beating Raw in terms of how good the pay-per-view is. Next up for Smackdown is Backlash and for Raw we are graced with a new pay-per-view called Great Balls of Fire. Tonight there was indeed Payback and some got it more then others.