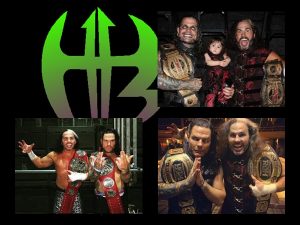 Up until Wrestlemania 33, the Hardy Boyz had never won a tag team match at Wrestlemania. This weekend truly was one of the best weekends that the Hardy Boyz have ever had in their career. Within the last month they have held the Impact Tag Team Titles, Ring of Honor Tag Team Titles, and now the WWE Raw Tag Team Titles. The Hardy Boyz have been away from WWE for eight long years and outside of WWE they did some really great things and even re-invented themselves. The ended up in TNA Impact Wrestling where for the last 7 years they each won the TNA World Heavyweight Championship and won the TNA Tag Team Championships on multiple occasions having great matches with the likes of the Wolves and Team 3D(Dudley Boyz). They really helped elevate the tag team division in TNA but it wasn’t until 2016 they made a huge change.

In 2016, Matt Hardy became Broken Matt and Jeff Hardy became Brother Nero. They were known by many names like Broken Brilliance, and Broken Hardy’s. They got really creative and made me laugh at some of the crazy things they did. I think their rivalry with Decay was one of the best feuds in TNA history and pro wrestling history. It was dark, disturbing and absolutely brilliant. Total Non Stop Deletion at the Hardy’s Compound was one of the only times in the last three year I have watched a full episode on Impact. I have never seen so much chaos in one episode but that’s what made it so great. About a month ago TNA underwent a change of power. Billy Corgan was forced out by Dixie Carter and then Carter was forced out by Anthem. The power of creative and control ended up in the hands of Jeff Jarrett. In a matter of days The Hardy’s were released from their contracts and went on their way without ever losing the TNA Tag Titles.

After the issues with TNA The Hardy’s ended up in Ring of Honor where they went on to defeat The Young Bucks for the ROH Tag Titles. The time they spent in Ring of Honor was short but they had a classic match with The Briscoes and defended the titles in a Ladder Match the night before Wrestlemania 33.  Even though they lost they passed the torch to The Young Bucks and went on their way. There were a lot of rumblings and rumors about a Hardy Boyz return but no one really knew when. When the match between The Club, Enzo/Cass and Cesaro/Sheamus got turned into a Ladder Match I had a feeling but wasn’t quite sure. When they came out to the ring the crowd was deafening and the Citrus Bowl went nuts. They had very good chemistry with all three teams in the ring which has me excited for the matches that are going to take.

With their win at Wrestlemania 33 the Hardy Boyz have now had over 20 Tag Team Title reigns all across the world. They have faced all the great teams in the last decade and now they have returned home. It doesn’t matter if they Team Xtreme, Broken Brilliance or even apart of some immortal group. They have built a legacy and now it extends beyond them to Reby, Maxell, Senor Benjamin and the future generations of Hardy’s Welcome back home Matt and Jeff and congratulations on winning the WWE Raw Tag Team Championships. It was wonderful and delightful!