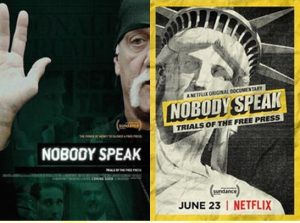 As I sat today to watch the Nobody Speak documentary on Netflix, I found it so ironic that I, Hollywood Joe owner of Hollywood’s World of Sports would be writing a review about the man who inspired me and entire generation of people. For those that don’t know my personal story I was a huge Hulk Hogan fan growing up. When Hogan turned into a heel he became “Hollywood” Hogan. I wore black and white like he did with the n.W.o. I wanted to watch this documentary for two main reasons. The main reason is because as I said I loved Hulk Hogan as a child and believed in the Hulk Hogan character. I also wanted to watch this because I consider myself to be a respectable blogger and journalist as it relates to the sports and pro wrestling world. The documentary revolved around Hulk Hogan-Gawker, exploited issues at the Las Vegas Journal Review and billionaires attacks on the media including President Trump.

I am avid supporter of free speech and free press. I believe that it’s the duty of journalists to report the news accurately and factually. The Las Vegas Review Journal was bought out by a big tycoon in Las Vegas several years ago. When the former owners would not reveal the person who was behind the buyout the reporters were to not worry about it and to do their jobs. A group of six  or seven journalists got together and did their research like a good a reporter should do, and they ended up doing a lot of digging which resulted in the answers they were looking for. The reporters finally cracked the case and ended up printing the article anyways. The new owners denied the acquisition at first but then finally admitted that they acquired. Out of those six or seven journalists only one of them is still employed by the newspaper. John L. Smith who was a reporter for the Las Vegas Review Journal wrote a book called “Sharks in the Desert.” He mentioned the billionaire tycoon in his book and was sued for libel because he didn’t like what was written about him. The statements about this tycoon were not damaging or threatening in my opinion. Smith ultimately filed for bankruptcy trying to fight the legal issues that stood before him. I believe if a journalist has concrete evidence and facts that they should be report on any business dealings, political issues or social issues out there without being subjected to a lawsuit. As I stated before, it is their duty to report only the truth and nothing about the truth.

The billionaire tycoon in Las Vegas has heavily influenced politics in Washington which brings up the subject of Donald Trump. The President of the United States has been very critical of the media and how they have reported to news. I honestly have gotten to the point where I no longer watch the news because I can no longer distinguish what’s real and what’s fake. One network reports one thing and another network reports something completely different. I do believe that Trump should back off on his attacks of the media and allow them to do theirs jobs. Maybe if he respected them they would give him respect in return. The definition of fact is “a piece of information used as evidence or as part of a report or news article” or “a thing that is indisputably the case.” I believe some media outlets have gotten away from that and exploit, distort and stretch the truth for ratings. During Trump’s campaign a lot his statements were used against him from his time on Celebrity Apprentice. I believe the man that was on Celebrity Apprentice is a completely different man that ran for Presidency of the United States. Trump the TV character is not the same Trump the President of the United States so at what point do you separate the two?

That question brings me to my childhood hero Hulk Hogan. In 2015, Hulk Hogan was released from WWE due to the racial and homophobic slurs that were found in the sex tape that he had several years earlier. Hogan has always maintained that he had no knowledge that he was being filmed and he never knew of the tape. When the tape leaked on Gawker Hogan’s attorney David Houston asked Gawker to remove the video or their would be legal action taken. Hogan’s sex tape opened up Pandora’s Box so to speak to a whole world that I never knew existed. Someone had the full sex tape video and tried to extort money from Hogan in exchange for not releasing the video to the media. Ultimately, the FBI got involved and arrested this person who had been sex tape trafficker for years. Hulk Hogan ultimately won the lawsuit for over 100 million dollars and ending up bankrupting Gawker all together. Hogan did not do this alone because he had some big time help. Peter Thiel another billionaire tycoon financed Hogan’s legal battle did not like what Gawker was all about. Prior to the Hogan lawsuit, Gawker had written some less then flattering stuff about Thiel and his circle of friends. They also brought Thiel’s sexuality into the spotlight which I think is the main reason he helped Hulk Hogan in his battle with them.

Behind closed doors Hulk Hogan is Terry Bollea and has a right to his privacy. I believe that what a person does in their home out of the public is their business and should not be reported as news. Many First Amendment supporters were critical of the judge’s decisions to award Hogan that amount of money he got and that it was unprecedented. Hogan’s career, legacy and image were completely destroyed by something that happened in his home. He lost millions and WWE even lost money in the stock market the day he was released from the company. I believe reporters not should not be allowed to set foot on someone’s property and fish for something that could possibly be damaging to someone. I hate when the paparazzi is always in these celebrities faces trying to search for whatever scandal they can find and not giving these people any privacy whatsoever. I believe the judge was right in her decision because it wasn’t information that the public necessarily needed to know.

Celebrities do deserve their privacy but they are not completely innocent either. Madonna has said, “I’ve thought about blowing up the White House.” Kathy Griffin had an image of a bloody Donald Trump head stating she wanted his head chopped off and recently Johnny Depp said Trump needed help and posed the question, “When was the last time an actor assassinated a president?” All of these statements are protected as free speech, but last I checked a threat against the President is an act of treason which is punishable by death. Now death sounds extreme but these celebrities need to be held accountable for their actions and words. Hogan was punished for something he did in his own home and these other celebrities are creating chaos where there doesn’t need to be chaos. They should be using their influence to unite the country instead of dividing it further. I believe the media needs to leave politics out of the interviews with celebrities and athletes all together. If you’re an entertainment journalist then stick to entertainment. If you’re a sports journalist then stick to sports. When they stray away from the specific topics then that’s when things get reported that really don’t need to be reported.

For most of my blogging life I have covered professional wrestling pretty in-depth. One thing I often hate are dirtsheets and clickbait sites.There are sites who report rumors as fact. I believe clickbait sites should be shut down whether it be about wrestling, political issues or social issues. I believe these sites are part of the reason people get so angry and ultimately out of control. Misinforming people is wrong and should not be tolerated. I do believe that Free Press and Free Speech should be protected as long as it’s not unnecessarily damaging and destroying people’s lives and reputation. I also believe billionaire tycoons should should not have the power to shut down journalists who uncover truths about their business dealings. Reporting on someone’s personal life is much different then reporting on someone’s business dealings that could potentially effect many people. The Nobody Speaks documentary focuses on all these issues and so much more. If you are a fan of Hulk Hogan, journalism, politics or any type of media I would highly suggest you watch this. It is what one of the most intense and intriguing documentaries I have ever watched.

On a personal note, I really do hope that the WWE does let Hulk Hogan back into their family someday. Everyone that knows him has said he has not a racist and is not hateful person. People make mistakes and should have be forgiven for those mistakes. Many celebrities and athletes have done much worse then he did and got a second chance. I would love to see Hulkamania run wild again, brother!