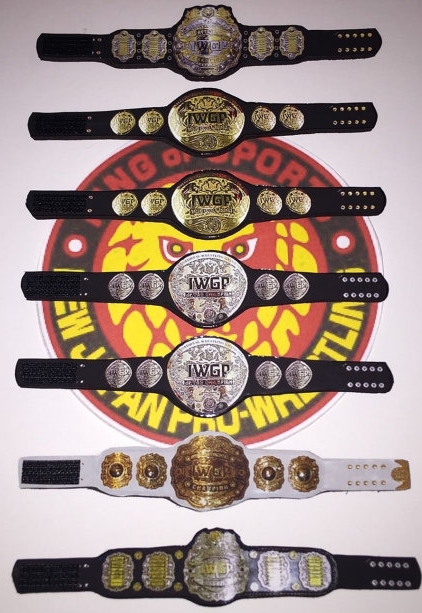 Recently I was surfing Youtube and came across a video of a former WWE Champion who went to Japan as champion and said that the WWE Championship was a toy and a prop. He stated that the IWGP Championship was the most important wrestling belt in the world. After sitting and thinking about his statements for awhile I realized he was absolutely right. In Japan, it’s always been more about the competition and the art of professional wrestling. I have always loved WWE but the way they make people champions has not always set well with people. In WWE, it’ always been about merchandising, marketing, and branding where in Japan it’s always about who is the best professional wrestling. Let’s take the current WWE Champion Jinder Mahal for example. He has a great build, great physique, and is a decent performer with a great character. However, the reason he is WWE Champion is because of the market they are trying to promote an India. Mahal is part Indian and has become a huge poster boy for the launching pad of the Indian market. Let’s take a look at New Japans current champions:

The IWGP Heavyweight Championship was first established in 1987 and held by Antonio Inoki. Some of the most notable champions in the past are Vader, The Great Muta, Masahiro Chono, Shinsuke Nakamura, AJ Styles and current champion Kazuchika Okada. The IWGP Intercontinental was established in 2011 with the first champion being MVP. Other notable title holders include Masato Tanaka, Bad Luck Fale, Nakamura, Kenny Omega and Michael Elgin. Shinsuke Nakamura elevated the Intercontinental Championship during his time in Japan. He left that championship in great in hands before he left for the WWE. Japan made that title what WWE use to make and that; the title of the best wrestler and best workhorse who could wrestle every day against every competitor. The IWGP Tag Championship was established in 1985 and the first champions were Kengo Kimura and Tatsumi Fujinami. There have been some incredible tag teams that have held these belts and those include The Steiner Brothers, Vader/Bam Bam Bigelow, The Jurassic Powers, Hiroshi Tanahashi/Shinsuke Nakamura, The Dudley Boys, The British Invasion, Davey Boy Smith Jr./Lance Archer, The Kingdom, The Bullet Club, The Briscoes and War Machine. These are all great tag teams that have their mark on Japan and the world.

The Junior Heavyweight Championship was established in 1986 with the first champion being Shiro Koshinaka. Many great champions have held this belt and the list is incredible. Some of the most notable champions include Owen Hart, Jushin Liger, Pegasus Kid, Ultimo Dragon, Sabu, Juventud Guerrera, Low Ki, Kota Ibushi, Prince Devitt, and Hiromu Takahashi. The IWGP Junior Heavyweight Tag Team Championships were first recognized in 1998 and the inaugural champions were Shinjiro Otani and Tatsuhito Takaiwa. Some of the more notable champions have been Gedo/Jado, American Dragon/Curry Man, Dick Togo/Taka Michinoku, The Motor City Machine Guns, reDragon, Roppongi Vice and current champions The Young Bucks. The NEVER Open Weight Championship has only been around for five years with Masato Tanaka being the first champion. Some of the champions in the first five years have been Tomohiro Ishii, Togi Makabe, Yuji Nagata and Hirooki Goto. The NEVER Open Weight 6 man Tag Team Championship just arrived in 2016 and the first champions were Chaos(Jay Briscoe, Mark Briscoe, Toru Yano). The Elite, The Bullet Club, Los Ingobernables de Japon and Taguchi Japan.

New Japan has had a history of illustrious champions. Every champion that’s been mention has had a respectable body of work and can really perform in the ring. Some champions made a name in Japan but didn’t succeed in the states, I don’t think that’s because they were not good enough. I think the systems are different and the presentation is not even comparable. WWE has always been about the gimmicks, the entertainment, and the personalities. While New Japan has some awesome personalities it has always been about the competition, the physicality, the styles of wrestling and the art of pro wrestling. The former WWE Champion who said that IWGP Championship is the most important championship in the wrestling world. The WWE Champion who said this often got a bad reputation for not being a good wrestling but a great entertainer. If you watch his matches in Japan you see a whole different side of  his wrestling ability. That’s the difference between New Japan and WWE. If WWE based their champions on how Japan did you would see a completely different WWE. The WWE Champion who wanted that IWGP Championship never did win what he considered the most important championship in pro wrestling. That man is…..well see yourself.

Yes that is correct Hulk Hogan wanted the IWGP Championship. He was very popular in Japan and you really got to see his abilities in Japan. Speaking of American’s competing in Japan, New Japan will be crowing the first IWGP United States Champion on July 2nd as part of a two night tournament featuring eight competitors. It will be the first live broadcast of New Japan Pro Wrestling in the USA. It will be on AXS TV live for the first time.

I believe Hulk Hogan’s words back in 1993 are ringing true to this day. New Japan has a legacy of great competitors and great champions and I believe that legacy and tradition will continue for many years to come. The United States Championship is going to add to that legacy as well as the first live broadcast from America will in July. It’s been a very long time since WWE has had any competition but if New Japan becomes successful in America hopefully we will see another great era in wrestling. IWGP stands for International Wrestling Grand Prix. When I think of the words Grand Prix I think of a race. In Japan, it’s a huge race to see who can be the absolute best and that’s why NJPW has always been great and always will be great!