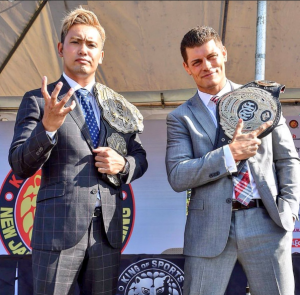 This weekend I spent time watching the entire New Japan Pro Wrestling United States G1 Special. This was the very first time that New Japan had ever done a live telecast in the United States and I certainly hope it’s not the last. I was very intrigued about how the Japanese style would go over in the states and the two night special left very little doubt in my mind that NJPW is the greatest pro wrestling promotion on the face of this planet. Before I begin why it was so great here are the results of the two nights in California

The first night was highlighted the IWGP Heavyweight Title match between Cody and Okada. I knew that this match was going to test the toughness of Cody because Okada doesn’t let up anyone. Cody hung in there and had one of the best matches of his career with a guy who just keeps having great matches. The one thing I enjoy about New Japan is that they the bring veterans and other international stars to elevate new and upcoming talent. Billy Gunn who lost is way as an agent in WWE has made a nice run in Japan so far. I never realized how tough he was until I start seeing him compete in Japan. Zack Sabre Jr. always steals the show for me. I love how he can bend, stretch, and manipulate joints, and ligaments anyway he wants. He almost reminds of what Stu Hart use to be like in the Hart Dungeon when he tortured people in training. I think ZBJ is taking the same career path as Finn Balor did. He established himself in the UK and is now ready to conquer Japan. If Sabre becomes a regular in New Japan I foresee him doing some great work there.

On the second night of action the United States Championship Tournament concluded with the semi-finals and finals. Kenny Omega making it to the finals was not a shock but I wondered about Sabre and Ishii. These two tore the house down and the match could have gone either way. I was actually surprised Sabre didn’t rip Ishii’s arm off with his multiple submissions. It ended up being Omega and Ishii in the finals which was another physical encounter. In the end, Kenny Omega became the first IWGP United States Champion which means that he’s staying in Japan and that the company is building around guys like him. He celebrated with his Bullet Club family and had an amazing speech afterwards. I must say the Bullet Club is the most over group in pro wrestling along with it’s individual personalities. I thought it was really awesome that the Guerrillas of Destiny brought their father Haku out for a special appearance in the six man tag. Haku has always been knows for being a legit tough bad ass and it shows in how his kids take to the ring as well. The highlight of the night for me was the interaction between Cody Rhodes and Will Ospreay in the closing moments of the eight man tag. Cody hit an awesome Disaster Kick and then followed up with one of the sickest Cross-Rhodes ever. I would love to see Cody take on guys like a Will Ospreay and Jay Briscoe in a big setting.  The Cody Rhodes in Japan and Ring of Honor is so much between the Cody Rhodes in WWE. If I was Cody I wouldn’t even consider going back to WWE for atleast five years.

I enjoyed the presentation of the G1 Special and how organic it was. They don’t need a lot of pyro, or fancy graphics to get their product noticed. All the matches are always so physical and each competitor is fierce in the ring. I really enjoyed the commentary of Jim Ross and Josh Barnett on a live setting. Good Ol’ JR had some awesome material which kept me very entertained throughout both nights. He would never get away with saying the things he did on WWE TV. Other than the thirty minute intermission on night two I enjoyed the flow of the show because they keep moving. There are now twenty to thirty minute promos and no cheesy backstage segments. All of that stuff is done after the show is over.  WWE maybe the number promotion in a lot of people’s minds but in terms of an overall pro wrestling show New Japan is the best in the world. WWE is a lot of fun and great entertainment but they lack the physicality and competitiveness that Japan has. I have always been a WWE fan and always will be because it’s entertaining to watch. However, Japan and Ring of Honor have developed an awesome relationship that will stand the test of time. New Japan announced it would be returning to the U.S. in 2018 for another show. If I was New Japan I would come to the states once every quarter to places like New York, Philadelphia, and Chicago. New Japan’s shows would do very well over here and maybe give WWE some much needed competition finally. It was a great weekend to be a pro wrestling fan, and see some of the different styles and personalities that were in the ring. Congratulations to New Japan on their first live United States show and congratulations to Kenny Omega on his historical achievement. 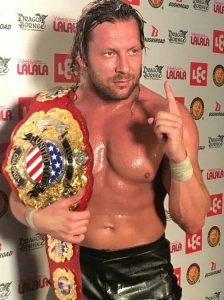