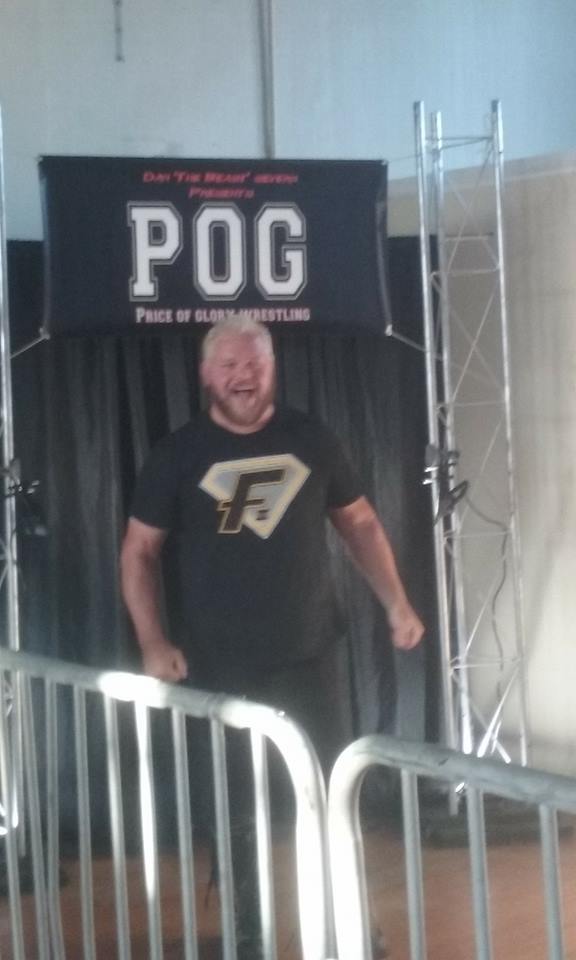 As I traveled down to Coldwater tonight for Faded Glory IX I knew it was going to be a great show. Dan Severn’s Price of Glory Wrestling has had great shows ever since their return last November. Tonight was headlined by ECW Icon and legend “The Franchise” Shane Douglas. It was wonderful meeting Shane and former TNA Superstar Shark Boy. They were both very friendly and welcoming when it comes talking about their history in the pro wrestling business. Before I begin with how they did and my thoughts on the show here are the results of POG Faded Glory:

One thing I always look forward to at POG is The Police department. They are always lively and entertaining with the crowd. They are one of the hottest groups on the independent scene and deserve having the spotlight on them. They took Sean Tyler, Kipp Rude and the debuting Miss Angel. Rude and Angle who are fairly new to the ring hung in there with a veteran team like The Police. Two competitors who are not new are Noah Lott and Dollar who have been in a power struggle since the return of POG. Noah Lott and Dollar have had many different types of matches but a blindfold match was something new for this historical and intense rivalry. Noah Lott and his crew kept getting at Dollar to the point where Dollar get himself disqualified. It was announced at the end of the night that Noah Lott and Dollar would compete in a Kendo Stick Match on September 23rd.

Another set of former partners and friends also continued their rivalry as Max Morrison and Jimmy Shawlin went to war. Despite continuous efforts of fight off Project Max the group was too much for Shawlin to handle. One has to wonder if Jack Verville and Mr. Nifty will return on September 23rd to even up the numbers against Project Max? In a return match from two shows ago, Shark Boy took on The Maltese Tiger in a highly competitive match. I enjoyed their match two shows ago and I enjoyed their match at Faded Glory. Personally as good as these two are together I would love to see them find a third animal out there and form a trios team to challenge for the POG Trios Championship.

One of the most highly anticipated matches of the night was the Moonsault Match between BAM and Fabuzio. This match was physical, brutal and punishing. Both men were very sneaky from the onset of the match. BAM sneak attacked Fabuzio before the bell even rang. Fabuzio even went as far took fake an injury which he did a masterful job of, because I thought he was legitimately hurt. Both men attempted multiple moonsaults but in the end BAM hit a devastating moonsault on Fabuzio to win the match and earn a POG Heavyweight Championship Match against the champion on September 23rd. One match that was intriguing because I didn’t know much about either man was “Ballistic” Brent Meyers and Blake Acumen. Meyers is a prodigy and student of “The Beast” Dan Severn which showed because of how aggressive he was and vicious submission skills. He had an impressive victory over Acumen which makes me believe that he is someone you’re going to want to keep your eye on. I see big things in Brent Meyers future.

Project Max returned to the ring to defend the POG Trio Titles against the team of Chris Moore, Tony Thunder and Jamal King. Project Max had an advantage with Max Morrison at ringside. I was really impressed with the team of Moore, Thunder and King. They really took it Project Max but unfortunately came up short. I hope to see these three in action again whether it be as a team or singles competition. In the main event, POG Heavyweight Champion Louis Lyndon took on Shane Douglas. The crowd was on fire for this match with chants of “Let’s go Shane” and “ECW.” They also chanted “Long John Silver ” at champion Louis Lyndon who always has Noah Lott and Fabuzio by his side. Douglas really brought the fight despite constant interference from Lott and Fabuzio. At the end, it looked like Douglas had won the title with a German-Suplex but Lyndon had one shoulder up while Douglas had both down. After the match, Shane gave a very moving speech to the wrestlers and the fans. He talked about the “Triple Threat” and honored Bam Bam Bigelow and Chris Candido. Shane Douglas was a class act all around and I hope to see him back in POG someday.

The next POG show is September 23rd. For more info go to www.facebook.com/POGWrestling

Posted by Hollywood's World of Sports on Saturday, July 15, 2017