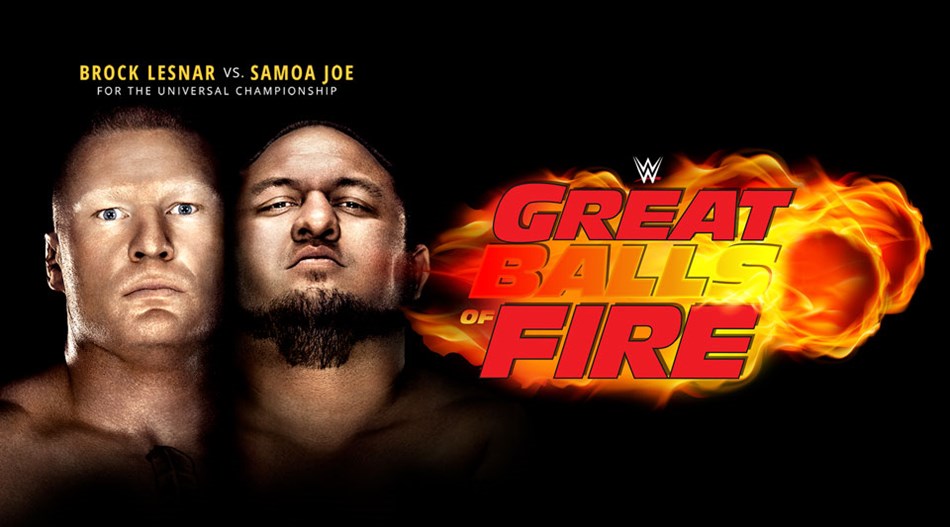 If someone were to ask me if a Jerry Lee Lewis song would be the theme of a WWE pay per view I would have called you crazy. Tonight had a great card on paper but sometimes those cards usually underachieve. I was really curious about how Brock Lesnar and Samoa Joe was going to be. Joe has been built up huge for this match and it’s about time they made someone look strong against Lesnar. Before I begin with my thoughts of the show here are the results:

The opening match of the night was Bray Wyatt and Seth Rollins. The last time I saw these two in a marquee match was when The Shield took on the Wyatt Family. It was an awesome match in which both men really stood out. I love the chemistry between the two of them because they are two very different people inside and outside the ring. I would like to see more out of these two in the future. Speaking of the future, the time future is now for Big Cass. His split from Enzo Amore has upset a lot of people including me. I personally thought they should have won the Tag Team Championships in NXT and on Raw, but Vince loves Cass and not Enzo. It’s another way Vince ruins the NXT stars that Triple H has spent time building up.

The match that I was intrigued by the most is the 30-minute Iron Man Match for the Tag Team Titles. Sheasaro has been a great tag team since they were put together almost a year ago. The Hardy’s have been fun to watch since they have been come back. This match was really intense all the way from the beginning of the bell to the end of it. This match was one of the best tag team matches in WWE in recent history. These two teams have such great chemistry together which is why it’s always fun to watch. The Women’s title match feature two fierce competitors in Sasha Banks and Alexa Bliss. I was excited about this match because they are both scrappy and have a lot of heart. Even though Alexa kept the title by count-out they left it open for the feud to continue. I hope to see a classic match between Bliss and Banks at Summerslam which is something they both deserve.

One feud I am sick and tired of is Dean Ambrose and The Miz. They have been feuding since Smackdown and it’s time for both of them move on. I do like The Miztourage because it gives Bo Dallas and Curtis Axel some TV time which both men deserve. This was the third match in a row that had blood in it which is an omen considering the pay per view use to be called Badd Blood. I hope Ambrose and The Miz move on from each other and we see some new contenders for the IC Title. There are guys like Apollo Crews, Heath Slater, Rhyno, Seth Rollins, Bray Wyatt and Finn Balor who should be thrown in the IC Title mix considering Lesnar, Joe, Reigns and Strowman are all in the main event picture. I absolutely loved the Ambulance Match because both men should not be beaten cleanly by pinfall at this point in time. This match was so physical and hard hitting which is why I love this feud. Braun Strowman is Roman’s kryptonite and that’s good because Roman usually has no equals except for Strowman, Lesnar and Joe. After the match was over Reigns put Strowman in the ambulance and ran it into the back of a semi-truck. The scene was incredible and it was so intense that they through Health Slater and Curt Hawkins into a jobber match while all this was going on. If this is the end of their rivalry I am sure going to miss it because this feud has brought out the best in Reigns and Strowman.

In the Main Event, Brock Lesnar made his first title defense since Wrestlemania and it was against Samoa Joe. I love how they built up Samoa Joe for this match but was it for nothing? Joe inflicted all the damage and he couldn’t kick out of one F-5. Samoa Joe had so much momentum heading into this match that WWE should have pulled the trigger and had Samoa Joe win the title. I am at least glad the made Lesnar look vulnerable against Samoa Joe. I believe that Joe should be in the Main Event at Summerslam with Reigns and Lesnar or even better yet have a fatal four way involving Strowman. It’s time the Universal Championship be featured again on TV weekly again. Other then a bad ending to a good match I loved this pay per view. It was great from start to the almost finish. I am going to give the show an 8 out of 10 for physicality and match quality. Next up for Raw is Summerslam where it will be a joint Raw and Smackdown pay per view. In two weeks time, Smackdown has Battleground so we will back for that installment of WWE pay-per-view review. Until then, tonight shook my nerves and you rattled my brain. Goodness, gracious, great balls of fire.