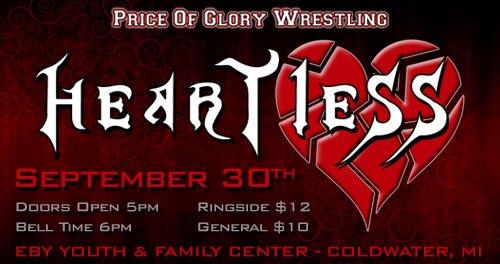 Tonight Price of Glory Wrestling presented Heartless and after what I saw in Coldwater tonight was definitely a heartless night. Before I begin with my thoughts on the night here are the results of POG Heartless:

The show opened with recently departed TNA Star Robbie E and he was getting the crowd excited for the show. Before he could really get the crowd going POG President Operations Supervisor  (P.O.S.) Noah Lott came out and interrupted him. Noah Lott and Robbie sparred verbally before Noah brought out current TNA star Kongo Kong. Robbie fought as hard as he could but interference from Lott and Kong’s power were not enough for Robbie on this night. The next match featured The Police Department taking on Sean Tyler, Kipp Rude and Miss Angel. These two teams have been feuding the last few shows and tonight it finally concluded Tyler, Rude and Angel beating The Police and earning a title shot again the Trios Champions down the road.

Tonight saw the debut of a new superstar by the name of Devil’s Right Hand. He was originally suppose to take on Maltese Tiger but the Tiger must have must have lost his stripes because he was not there. Tony Thunder filled in on short notice and put up a good fight but the crazed maniac known as Devil’s Right Hand was just way too much for anyone to handle. One of the marquee matches that was advertised for the night was Louis Lyndon defending the POG Heavyweight Championship against BAM. This match was as is competitive as you can get. This was perhaps the greatest POG Heavyweight Championship Match in the history. Both men gave it there all in a back and forth match that could have gone either way. In the end, Noah Lott and Fabuzio paid off for Lyndon again. Fabuzio threw in the belt for Lyndon but BAM got a hold of it just as the referee turned around and caused a disqualification. Louis Lyndon has held that title for almost a year and as long as has Noah Lott and Fabuzio in his corner it will be very hard to stop him.

The Bomb Shelter returned to POG tonight to take on the team of Blake Acumen and Matt Hagen. The Bomb Shelter looked like a solid force tonight and they are looking to get in the hunt for the Trio’s Titles. One of the most storied rivalries in POG continued tonight as Dollar and Noah Lott met in a Kendo Stick Match. When Dollar was making his entrance  Noah blindsided him and dominated him from the beginning. Before Dollar could get any momentum Kongo Kong returned to aid Noah Lott and left Dollar laying. You can bet heading into Glorified, Dollar will be looking for  revenge. I am sure this rivalry is far from over.

Jack Thriller returned from suspension tonight to take on Fabuzio. I am honestly surprised Fabuzio is recovered from the beating  he took from BAM during the show. Tonight Fabuzio’s struggles continued as he could not get past Thriller. In the Main Event, Project Max defended the POG Trios Title against Hometown Diesel. This marked the first time in almost a year Mr. Nifty was in a POG ring due to injury. Jimmy Shawlin has been wanting revenge on Max Morrison for a year. Shawlin absolutely decimated Beardslee and Keto leaving Hometown Diesel at 3 to 1 advantage. Just as I thought Max was done for Jack Verville and Mr. Nifty turned on Shawlin allowing Max to get pin and retain the titles. Project Max has grown in numbers and the question has to be asked. Can anyone stop this powerful group? Is it time to bring in a group like The Nomads or Death Threat Army to POG to give Project Max a run for their money? Where do the new number one contenders and The Bomb Shelter fit in to the equation? We will have to wait to find out the answers to these questions and more.

Price of Glory returns to action on November 18th for Gloried, the annual Glory Cup Tournament. There are a lot of questions heading into that show. Who will challenge Louis Lyndon for the POG Heavyweight Title? What level will Noah Lott and Dollar take their rivalry to next? Will Kongo Kong continue his reign of havoc and terror on the POG roster? Who will be in this years Glory Cup Tounament? To find out these answers stay tuned by going to https://www.facebook.com/POGwrestling/

Posted by Hollywood's World of Sports on Saturday, September 30, 2017