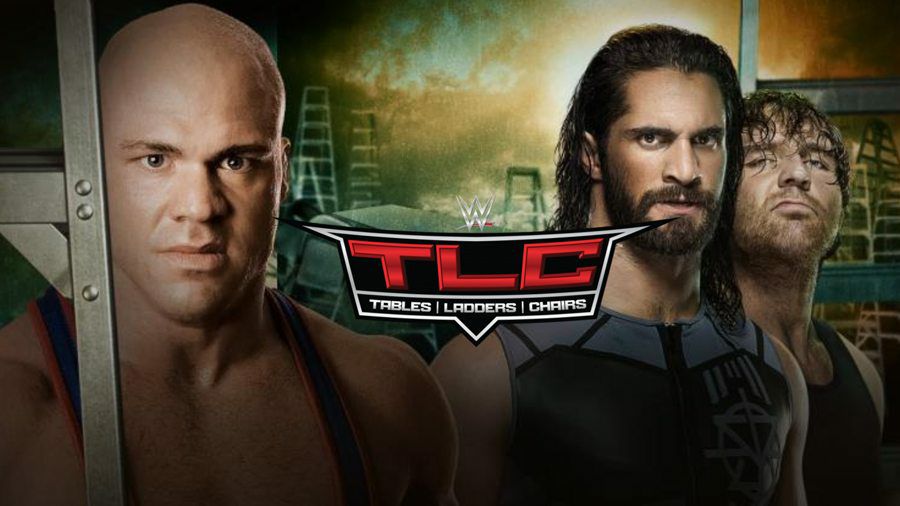 What a whirlwind of a week for the WWE and how they have had to adjust on the spot. It was announced Friday afternoon that Bray Wyatt and Roman Reigns would not be competing at TLC due to the viral meningitis that’s been going around the WWE locker room. It was announced that AJ Styles would be the new opponent for Finn Balor and that Kurt Angle would be replacing Roman Reigns in the main event. I know everyone has their opinions about it but WWE did what they had to do. In my opinion, they turn a bad situation into a bad one by finding suitable replacements for the show. Before I begin with how the replacements did here are the results of WWE TLC:

The opening match of the night was the long awaited debut of Asuka whose first opponent on the main roster was Emma. The match went as I expected with Asuka winning but give credit to Emma. This is the most she’s been showcased in a long time and it’s about time. I think Emma’s stock raised tonight with her performance against Asuka so hopefully she gets more opportunities in the future. Asuka looked great in her debut and I know she’s going to be involved in some great matches in the future. Next up was a Cruiserweight Tag Team match which shockingly was not on the preshow. This is the first time I can remember WWE having two Cruiserweight matches on the main show in a long time. It was great to Cedric Alexander finally win his first main show WWE match. He, Rich Swann, and Jack Gallagher should be constantly featured on WWE Television due to their personalities and athleticism. I am hoping in the future that the Cruiserweights starting getting featured more.

Alexa Bliss is the most improved talent in WWE over the last year and a half since she’s been up on the main roster. She’s made a credible and convincing heel since her turn in NXT. I don’t think the sparkle obsessed cheerleader was going to make it far so being this cruel conceited heel is the best thing that could have happened for her. I also have to say that Mickie James being back is great because she is a legendary performer who can still go. I was really impressed with how well these two did together. Both women’s matches went really well tonight and that’s a good sign for the Women’s Division. We go from one title match to another with Kalisto defending the WWE Cruiserweight Championship against Enzo Amore. I am glad Kalisto is getting his chance to shine again because he is a very gifted performer and knows how to be a professional. I don’t like the fact they took the belt off of Kalisto so fast because it’s like a slap in the face to the entire Cruiserweight Division. I hope some of these Cruiserweights starting being used correctly.

The one match I was excited about was AJ Styles taking “The Demon” Finn Balor due to Bray Wyatt being out to illness. I think this was the dream match that everyone wanted to see. I also think after watching this match that they saved some stuff for another match. This was a well put together match on short notice but I think they are going to have a greater match down the road. I love Balor and Styles and their paths to WWE are very similar. I also have to note that Styles did not hit Phenomenal Forearm or the Styles Clash which also makes me believe they are going to take each other at least one more time. The most iconic image took place after the match when Balor and Styles did “Too Sweet” gesture in a sign of respect. One guy that has been disrespected all night was Elias. He tried performing three times but Jason Jordan kept interrupting him which finally led to a match. I love Jason Jordan’s athleticism and energy but no one is really into him yet. I think he will eventually get over but right now isn’t is time.

The Main Event was the 5 on 3 Handicap TLC Match between The Miz, Braun Strowman, Kane, Cesaro and Sheamus taking on Dean Ambrose, Seth Rollins and Kurt Angle who is replacing Roman Reigns. I think it was absolutely awesome that Kurt Angle wore The Shield attire to give added effect of what the match was supposed to be.  Matches like this are chaotic and that’s what this was. I think they held Kurt Angle back during the match to protect him. This is not one of th0se matches that is considered a wrestling classic but it was sure entertaining. There were so many chaotic moments in this match like Dean having two tables not break on him or Kurt Angle doing the Angle Slam to Cesaro through a table. I think the most insane part of the night was Braun Strowman being put in garbage truck after Kane demolished him. At the end of the night Kurt Angle and two thirds of The Shield stood tall. This show wasn’t an instant classic but it wasnt terrible. I will give it a 7 out of 10 for effort and energy. The crowd was on fire and made the show really fun. I think the fallout is going to be great and the road to Survivor Series starts tomorrow night.