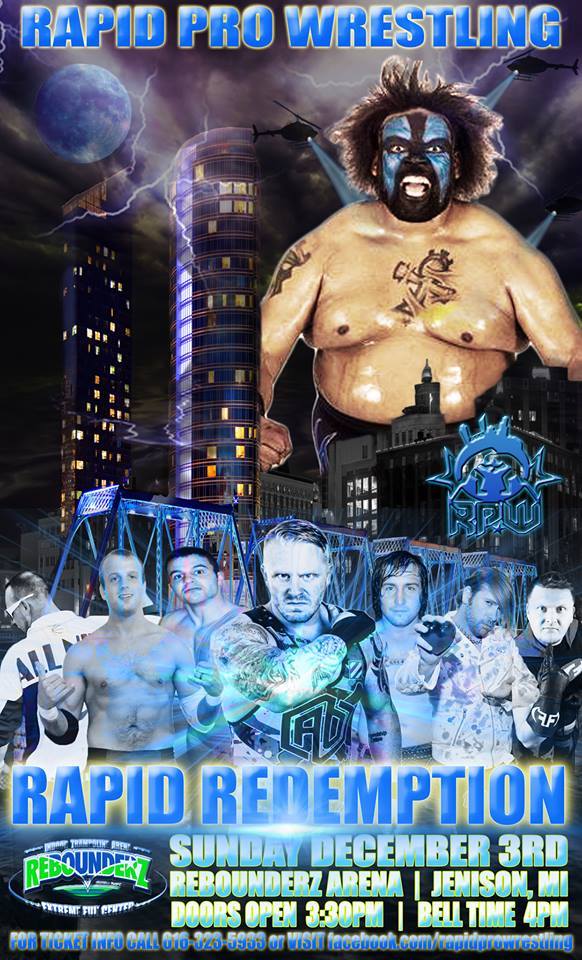 Tonight in front of a packed house at Rebounderz Arena in Jenison, MI wrestling fans saw the long awaited and much anticipated return of Rapid Pro Wrestling to the Grand Rapids area. The crowd and the card were off the charts and left a lasting impression on everyone who was in attendance. Before I begin with my review of the show here are the results of Rapid Redemption:

The opening match was between two well traveled performers in Louis Lyndon and Josh Raymond. This match was a great match to kick of the show as Raymond attempted to leave a few times which would have been a delight to the crowd. Raymond tried using a lot of crafty tricks but in the end Lyndon had  his number. Louis Lyndon is always high octane and high energy when he steps into the ring. Whether he’s being cheered of booed he is one of the most charismatic, entertaining and skillful performers I have had the opportunity of watching over the last few years. Once the match was over Raymond start pouting in the ring until Aaron Orion came out to the ring. It seemed that Orion and Raymond formed an alliance and it wouldn’t be the last time we saw those two during the night. The next match featured two competitors I’ve never seen live before. Dre Jacobs and Salem Ash are two very talented competitors in the ring and both are very intimidating in their own way. I absolutely loved the hard hitting contest that these two had and I hope RPW will be bringing them back in the future.

When people often visit Hollywood’s World of Sports they see a lot of mentions about The Nomads. I’ve been following The Nomads for quite some time now and they are a hard hitting, old school and beat ’em down kind of tag team. One thing I will applaud about The Nomads is they have some of the best branding and marketing for a tag team on the independent scene. Their opponents tonight were Cobra T.A. and Xavier Justice who traveled over from Pure Pro Wrestling to do a cross promotion match with Rapid Pro Wrestling. These two teams went back and forth through the match and it could have gone either way. In the end, The Nomads prevailed with their dirty tricks and cheap shots with the crowd being less than thrilled about their victory. Another person I mention quite frequently on HWOS is Alex Weir and tonight I got to see he versus Jack Price for the first time live. These two have had a storied rivalry in their short time being around each and tonight was not a disappointment. These two showcased the best stuff they had in their arsenal and it showed why their feud is becoming one of the hottest in the state. Jack Price may gotten the victory in the record books but in my opinion both men walked out winners with their performance tonight.

As I mentioned earlier Aaron Orion formed some sort of an alliance with Josh Raymond at the beginning of the night and tonight it paid off. Orion took on veteran Frankie the Face in a match that I was most intrigued by due to the styles and the experience factor that Frankie had over Orion. Frankie showed a lot of heart and proved why he is someone you should respect when you step in the ring with him. Even though he deserves that respect that didn’t stop Josh Raymond from aiding Aaron Orion to a victory over one of the best wrestlers West Michigan has ever had. Two people who I’ve been watching for quite some time got to face off tonight in the form of Max Morrison and Jack Verville. Max has been terrorizing everyone anytime he shows up with Project Max or even when he’s by himself. He always has tricks up his sleeve and tonight he had use them against a great submission specialist in Jack Verville.  Verville is one of the most lovable people you could ever meet in and out of the ring. Verville has a certain intensity about him that is very unique which makes him so much fun to watch. Jack Verville is someone you can get behind and support when he’s in the ring and Max is one of the most evil competitors I’ve seen step foot into a wrestling ring.

Earlier in the night, injured competitor Adam Renolds came out to start RPW’S Anti-Bullying Campaign. He came out with the mascot who I am calling Rebounder and talked about how kids shouldn’t bully and should be aware when bullying is taking place. Before he could really dive into his story the duo of Jeff King and Jimmy Shawlin came out to poke of Renolds and the fact that was unable to compete. King and Shawlin attacked the injured Renolds until Kongo Kong made the save and chased both men off. The Main Event became a tag team match the had the duo of King and Shawlin taking on Kongo Kong and the mascot Rebounder. Kongo Kong without a doubt is the most intimidating professional wrestler I’ve ever watched live. When you add that in with the over the top character of Jeff King it was a recipe for success. Kongo Kong absolutely electrified the crowd and tore down Shawlin and King for their actions earlier in the night.

Tonight was a special night for the Grand Rapids area in terms of having a great quality professional wrestling show in the area.  The crowd, the matches, and the overall atmosphere was special and very rewarding for all those involved with the show. I personally would like to thank RPW’s Owners Dan Case and John Knape for allowing me access to the wrestlers and allowing me to cover this wonderful show. Rapid Pro Wrestling is back and it’s back in a HUGE way. In 2017, we saw the return of RPW but in 2018 the Grand Rapids area better be prepared for RPW to come at you full force. For more info on RPW check out  https://www.facebook.com/rapidprowrestling/