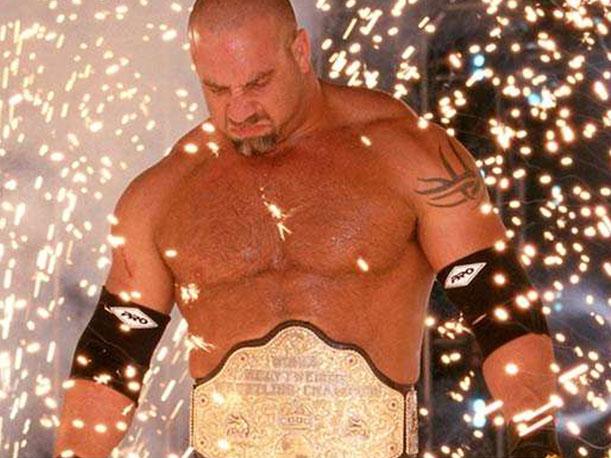 It’s that time of year in WWE where we are gearing up for the Royal Rumble, the Road to Wrestlemania and the incoming class to the WWE Hall of Fame. The first inductee to this years WWE Hall of Fame is none other than Bill Goldberg. In 1997, when the Monday Night Wars were at their height WCW debuted a new star that had never been heard of. He was quiet, aggressive and finished opponents pretty quickly. He was the one person outside of the n.W.o. who became a megastar in W.C.W. Less then a year into his career he won the WCW United States Title from Raven and won the WCW World Heavyweight Championship from “Hollywood” Hulk Hogan. Goldberg when undefeated from September 1997 until December 1998 where his undefeated streak ended at Starrcade by Kevin Nash.

After his one and only WCW Championship run Goldberg lost a lot of momentum in WCW. He won the WCW Tag Team Championships with Bret Hart and eventually held the United States Championship before WCW shut down. When WCW shut down in March 2001 Goldberg disappeared and started working for All Japan Pro Wrestling until WWE came calling. The day after Wrestlemania 19, Goldberg made his debut by spearing The Rock to end the show. In his one year run with WWE he feuded with Chris Jericho, Christian, Batista, Triple and Brock Lesnar. At Wrestlemania 20 he and Lesnar ended their first runs with WWE in a match that really rubbed people the wrong way. I never thought either man would ever return but in the wrestling business you never say never. When Goldberg left WWE he was featured in a lot of TV shows and movies. He was featured on Celebrity Apprentice, Hulk Hogan’s Celebrity Wrestling, Bullrun and more. He also starred in the remake of The Longest Yard which featured a huge cast of characters. Goldberg also did commentary for Brock Lesnar’s first ever MMA fight and also did commentary for Strikeforce and EliteXC. One of the biggest media projects he was involved with is being on the cover of WWE2K17 which is why you never say never in pro wrestling.

Goldberg being named coverstar for WWE 2K17 brought out a lot of speculation on if he would return to the ring or this was just a one off deal with 2K. After making multiple media appearances he finally hinted on ESPN Sportscenter that he had unfinished business with Brock Lesnar. So almost thirteen years after he left WWE he returned to the ring at Survivor Series 2016 and defeated Lesnar in 86 seconds.  This led to one more final run on the Road to Wrestlemania. At WWE Fastlane he defeated Kevin Owens to become the third WWE Universal Champion and entered as champion at Wrestlemania 33. He lost the championship to Lesnar in a match that exceeded expectation and erased the image they created thirteen years prior. In a career that spanned twenty years in wrestling and the media Goldberg left the ring on his own time and his own terms. He did it his way and that’s what was so special about Goldberg. His career had a purpose, meaning and he used his stature as a star to help children. Some people may disagree with Goldberg being in the Hall of Fame but in his short time in the wrestling ring he made an immediate and unforgettable impact. Congratulations to Bill Goldberg on becoming the newest member of the WWE Hall of Fame!