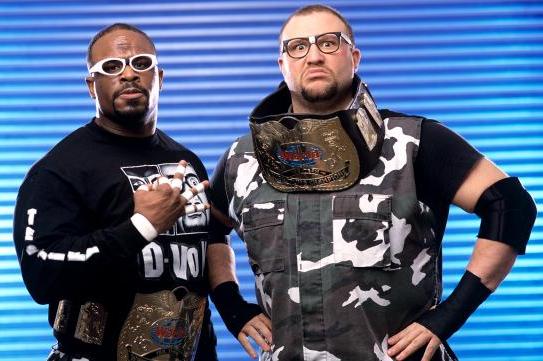 “D-Von get the Hall of Fame rings.” That’s what came to my mind when I heard that one of the greatest tag teams of all time were going to be in this years WWE Hall of Fame. The Dudley’s started being a team in 1996 as part of the Dudley Family which included Spike Dudley, Big Dick Dudley and Sign Guy Dudley. Eventually the focal point became Bubba Ray and D-Von and together the created legacy that is unparalleled and will probably never be duplicated again. During their time in ECW they would always cause a stir, get the fans angry and push the line harder than anyone else. It was those traits that got the Dudley’s noticed by WWE where for seven years they would take on some of the greatest tag teams in the world. Even this is the WWE Hall of Fame they accomplished so much even outside of WWE and it’s those accomplishments that should be just as recognized as the ones they had in WWE.

In WWE, they took on many tag teams like The Hardy’s, Too Cool, APA, New Age Outlaws and Edge and Christian. They were involved in the legendary Tables, Ladders and Chair Matches where they helped put tag team wrestling on the map in a way no one ever did before. The Dudley’s also were a part of some wild moments like putting Mae Young through a table or main eventing ECW One Night Stand in 2005. Everything the Dudley’s did had meaning and it was very significant. Once they left WWE they headed to TNA Impact Wrestling where they spent the next eight years having some great feuds with teams like Beer Money, America’s Most Wanted, 3Live Kru, The James Gang, LAX, Motor City Machine Guns and so many more. One of the highlights for me watching the Dudley’s in TNA was when Bubba Ray transformed into Bully Ray and became the leader of Aces and Eights. The Aces and Eights faction made a huge impact in Impact Wrestling during the short time they were together. Bubba and D-Von also found success in Japan where they competed in New Japan Pro Wrestling against The Most Violent Players and the British Invasion. The Dudleys did so much in WWE and away from WWE but sometimes there is no place like home.

After a 10 year absence from WWE they returned during the summer of 2015 where the feuded with The New Day, The Wyatt Family, The Uso’s and The Club. Once their one year run with WWE was over D-Von went on to become an agent and Bubba went to compete in Ring of Honor where he won the ROH 6-Man Tag Team Titles with The Briscoes. Bubba Ray and D-Von won tag team gold everywhere they went which makes the most decorated tag team of all time. The Dudley Boys accomplishments are as follows: