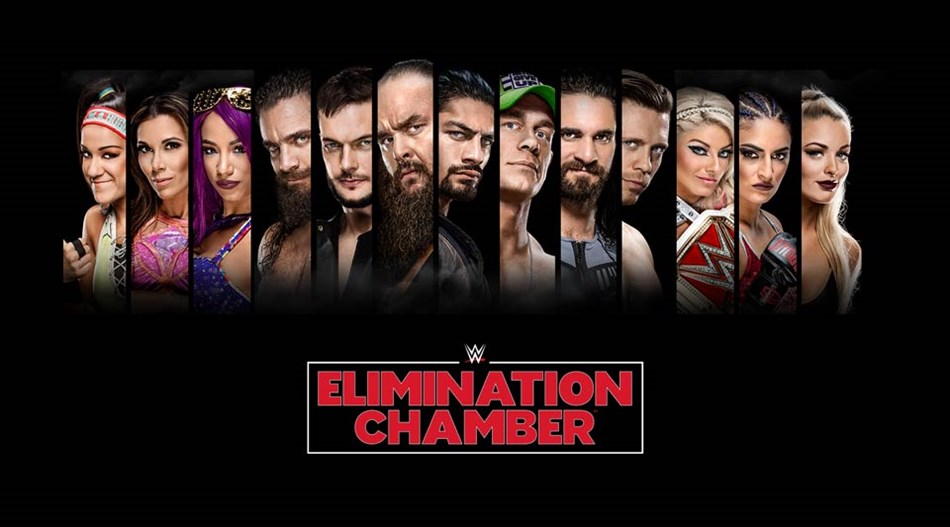 The night started off with the first ever Women’s Elimination Chamber Match and the first two competitors were Sonya Deville and Bayley. I have to say that I was really impressed with Sasha Banks during this match. She came out ready to fight and so did Mickie James. I was really shocked that Absolution got eliminated so quickly but I was not shocked to see Bayley and Sasha Banks on each other. The final two came down to Alexa Bliss and Sasha Banks and they tore the house down. Alexa came out the winner and will head to Wrestlemania as the champion. Next up was the Tag Team Championship Match between The Bar and Titus Worldwide. Going into the match Titus Worldwide had beaten The Bar three previous times which made me wonder if they had The Bar’s Number. Unfortunately when it mattered the most Titus and Apollo couldn’t get the job done. I personally think Titus and Apollo deserve a championship reign but it won’t be during Wrestlemania season.

We know that Alexa Bliss is going to Wrestlemania as the Raw Women’s Champion, but the big question was who is Asuka challenging at Wrestlemania and would Nia Jax be able to end Asuka’s undefeated streak? Jax may have lost the match but she left a trail of destruction once the match was over.  I personally think Nia Jax shined tonight and I hope she has a prime spot on Wrestlemania this year. I feel like she has improved so much since she was brought up to the main roster and the time to push her into the spotlight is now. When it comes to the spotlight one rivalry that needs to be in the spotlight more is the feud between Matt Hardy and Bray Wyatt. I absolutely love the psychology between Hardy and Wyatt. I think they play off each other very well but I still feel the feud is missing something. I am hoping they have something really epic for Wrestlemania, because of how crazy and charismatic they both are.

Before we could get to the Main Event, Ronda Rousey was in the house to sign her official Monday Night Raw contract. Kurt Angle, Triple H and Stephanie McMahon all came out before Ronda did, which had me wondering what would happen. I had a feeling that the incident at Wrestlemania 31 would be brought up when Rousey embarrassed Triple H and Stephanie.  The segment started off bad with Ronda not really speaking well, but it ended in epic fashion which was good for the buildup for Wrestlemania. The real buildup for Wrestlemania happened in the main event when the Men’s Elimination Chamber would determine who goes on to face Brock Lesnar at Wrestlemania. The first three men in the Chamber were The Miz, Finn Balor and and Seth Rollins. This match was intense, but the intensity picked up even more when Braun Strowman entered the match. He laid waste to everyone during the time he was in. At one point, everyone hit their finisher on Strowman and he kicked out of all of them. This match was very hard hitting but this match lacked terrible psychology in regards to Strowman. Are you really trying to tell me that five guys couldn’t beat Strowman, but you’re trying to tell me that Roman Reigns all on his own can beat him? This is why Vince McMahon really needs to step down and let Triple H handle the booking. The only saving grace is that Strowman destroyed Reigns after the match.