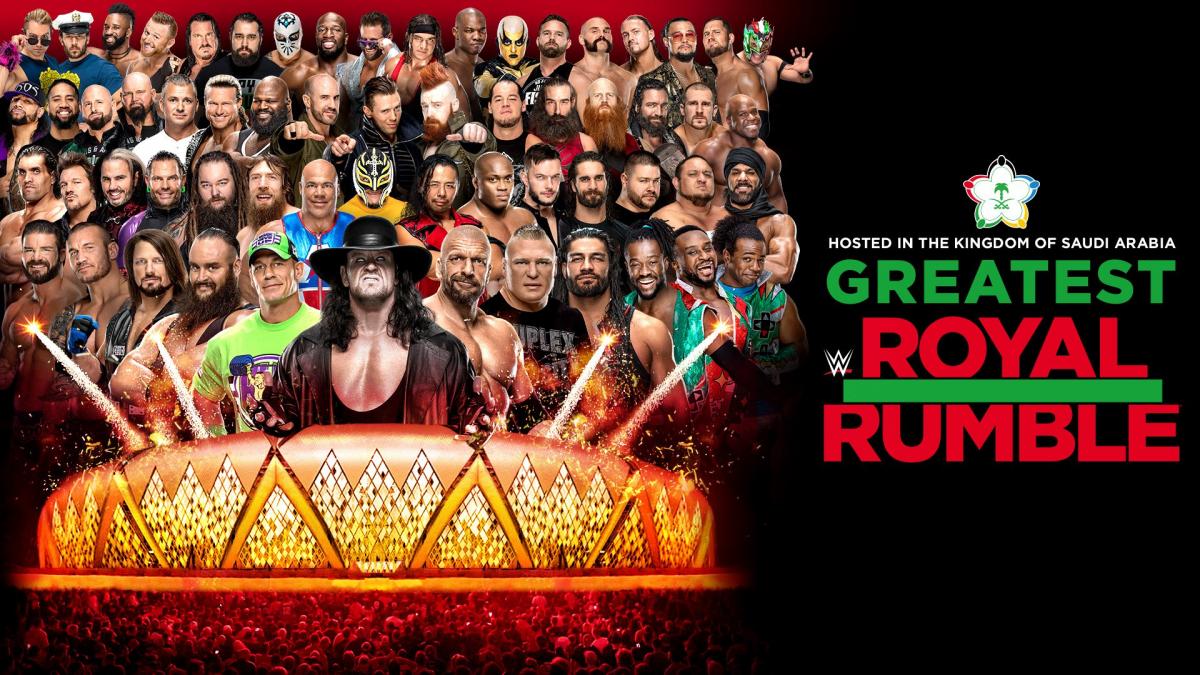 Today, the WWE made history by going to Saudi Arabia and putting on the Greatest Royal Rumble. For the last week or so there has been a lot of backlash from the fans, people in the industry and even part of the media about certain aspects of this show. I truly wanted to be mad at WWE for some of things they sacrificed for this show, but I knew it was a show that I wasn’t going to want to miss. Before I begin with my thoughts on the show here are the results of the Greatest Royal Rumble:

The opening match of the show were two of the greatest legends in Triple H and John Cena. I love how both men had completely organic reactions to the crowd and the atmosphere. It was a good way to get the show started. It was cool to see these two square off again because it’s been almost ten years since they faced each in a one on one match. Following the match between two legends was the Cruiserweight Championship match between Cedric Alexander and Kalisto. I was really impressed by these two and how well they performed. I really felt it made up for the lackluster match that Alexander had with Mustafa Ali at Wrestlemania. I am excited that 205 Live got put into the spotlight and was able to show what they are made of. I hope this is good sign for 205 Live and their future.

I was wondering how the crowd was going to react to the weirdness of Matt Hardy and Bray Wyatt. The Bar and the Woken Warriors had a really good match and told the story it needed to. I really love where the Hardy and Wyatt storyline is headed. I think this has been a very good thing for Bray, because his career was floundering and going nowhere. It’s taken a while to get going, but the Woken Warriors are rolling at full force. One Hardy gained gold and other one was looking to hold on to his championship. Jeff Hardy defended the United States Championship against Jinder Mahal. I am not a fan of Mahal’s work and never been. He is very sloppy and stiff in the ring, and I am glad that WWE is starting to see this.

I just have to to say that I love the Bludgeon Brothers. I am enjoying that these two monsters are finally getting a meaningful title run. I will be curious to see who challenged Harper and Rowan to give them a run for their money. I honestly feel like The Uso’s should have moved to Raw to feud with a whole new set of tag teams. Next up was the Intercontinental Championship Ladder Match. This match was fairly predictable as The Miz and Samoa Joe are on Smackdown and the title is on Monday Night Raw. I also don’t think the feud between Rollins and Balor is over just yet. The finish of the Ladder Match left the door wide open a continued feud. I will be interested where The Miz and Samoa Joe go from here on Smackdown. I guess we will have to wait until after Backlash to find out.

At Wrestlemania, Nakamura turned on Styles, which had left room for this match to be a barn burner. Unfortunately the ending didn’t live up to what it should have been. The match ended by Double Count, which I don’t necessarily agree with, but they left it so they feud could continue next Sunday at WWE Backlash. This show was full of history making moments and none may be more historic then The Undertaker competing in a Casket Match for the first time in the decade. The only thing I didn’t like about this match is that there was no build up except for trash talking Rusev did with TMZ. The Undertaker looked really good and I was glad this match lasted longer then the Cena match at Wrestlemania did.  I am wondering about the futures of The Undertaker and Rusev after this match. I feel like WWE is making a really bad mistake trying to derail the Rusev Day Movement. It’s made them a ton of money and the crowd loves it.

One thing that I am sure fans aren’t in love with is the fact Brock Lesnar retained the WWE Universal Championship. This Steel Cage match was absolutely pointless because of how it ended. This match isn’t worth talking about so we are moving on. The Main Event of the night was the greatest and largest Royal Rumble ever. The first two that entered were Daniel Bryan and Dolph Ziggler. I find it fitting that the two best workhorses in WWE started the match.  There were some interesting surprises in this rumble match like a sumo wrestler that I have never heard and the return of Hornswoggle. I also have to say that it was so great to see the 205 Live guys interact with the Raw and Smackdown guys. I have always felt the best way to get 205 Live in the spotlight is to let them interact with the main roster guys. There were some memorable moments in this match like Rey Mysterio’s return, Titus O’Neill tripping to the ring and Randy Orton catching Apollo Crews with an RKO in the middle of the air. There were some interesting omissions in this match like Big Show and Kane who were advertised but not involved on the show. At the end of the match it was Braun Strowman standing tall as the winner of the greatest Royal Rumble Match.

The Greatest Royal Rumble was a very unique event. Unfortunately, the Superstar Shakeup really made the show very predictable in some of the matches. I had an idea of whowas going to win certain matches based on the Shakeup but there were some swerves like the WWE Universal Championship Match and the WWE Championship Match. I am going to give the show a 7.5 for historical purposes and match quality. The matches had good quality to them but I feel like some of the storytelling was off. I will be curious to see how all of this factors in to Raw, Smackdown and Backlash over the next week. The Greatest Royal Rumble was indeed a spectacle for the ages and hopefully this is not the last time we see an event of this magnitude.