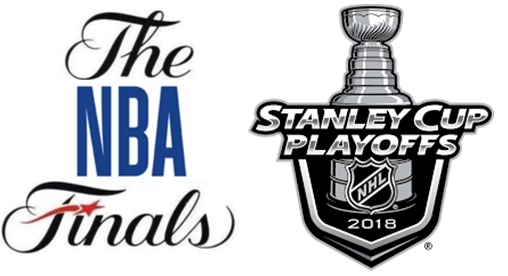 We have arrived at that time of year that basketball and hockey fans absolutely love. The NBA Finals and Stanley Cup Finals have started which means it all comes down to one Best of 7 Series to determine who is the best in the each league. Both sports have very different stories that may appeal to some but one of them has been the same song and dance. The NBA Finals aren’t anything new because for the fourth year in a row we will be seeing the Cleveland Cavaliers taking on the Golden State Warriors. The only thing intriguing about the Finals is how LeBron James took the worst supporting cast he has ever had and got them to the biggest series of their lives. Meanwhile in the NHL, the Stanley Cup Finals have so much excitement behind them because of the historical significance behind it. The Vegas Golden Knights who are in their inaugural season have been a team that has been exciting to watch. On the side of the equation one of the NHL’s most popular players in Alex Ovechkin has finally made it to the Stanley Cup Finals. Ovechkin is considered to be one of the greatest players of this generation to not win a championship. That’s what makes the Stanley Cup Finals so intriguing this year.

These stories are exciting, intriguing and have many excited but they take too long to get there. The NBA and NHL run similar schedule and start within a couple of weeks of each other. Both leagues have 82 game seasons and have eight teams from each conference in their playoff brackets. From the first round until the finals begins it takes six weeks to get to that point. The MLB playoffs take four weeks total from start to finish, March Madness takes four weeks total and the NFL playoffs take four weeks total if you forget about the week off they have before the Super Bowl. If the NBA Finals and Stanley Cup Finals went the distance it would be a total of two months that the playoffs went on, which is just too much for the short attention spans of this generation. Most people want instant results which is why the ratings don’t start showing until the conference finals. I think having eight teams is still a good concept but neither league understands the concept of time.

There a couple of solutions to explore when it comes to the NBA and NHL playoffs if you are looking for instant results and something that isn’t so drawn out. The first solution is make the first two rounds a Best of 5 series, but if that doesn’t make folks happy then at least make the first round shorter. I feel like the better teams don’t need a seven game series to show how dominant they are. If they are dominant it usually shows in the regular season and the point has already been driven home to the audience. The second solution would be to make these teams play back to back when they are at home and have a day in between when they travel. There is no need to have three days off in between games when they are getting paid millions of dollars. The argument some people might give is that they will get tired out and they won’t be giving their best effort. Well if you get tired out and can’t give your best effort than that’s when you get eliminated and can rest for the next three months. There is one other solution that might that is completely wild and crazy but could be very interesting to see. Eliminate the Conferences and have a 1 through 16 seeding to make the playoffs more competitive from the beginning to keep people’s interest from the start.

Going forward I think some of the ideas should be considered or at least explored. As a baseball fan who loves all sports when the month of May begins the season IS  in full effect and I usually tune everything else out. I am sure NASCAR fans, IndyCar Fans, College Baseball and College Softball fans feel the same way. It’s nice outside and they want to be watching games in the warm weather. Now that the NBA and Stanley Cup Finals are here, we finally get to see who the absolute best in each sports. It’s these series that I care about and these that matter. The first and second rounds of the playoffs don’t matter to me and probably don’t matter much to viewers unless it’s their team. They need to be shortened and they need to move quicker. Right now we are seeing so much history in both the NBA and NHL. We are seeing two teams facing each other in the finals for the fourth year in a row and we are seeing a first year team going for a championship that other teams haven’t even had a chance to win yet. It would just be a lot better if these history making moments weren’t so drawn out and slow like watching paint dry. Enjoy the NBA and Stanley Cup Finals everyone and remember Controversy Doesn’t Come Without Criticism!