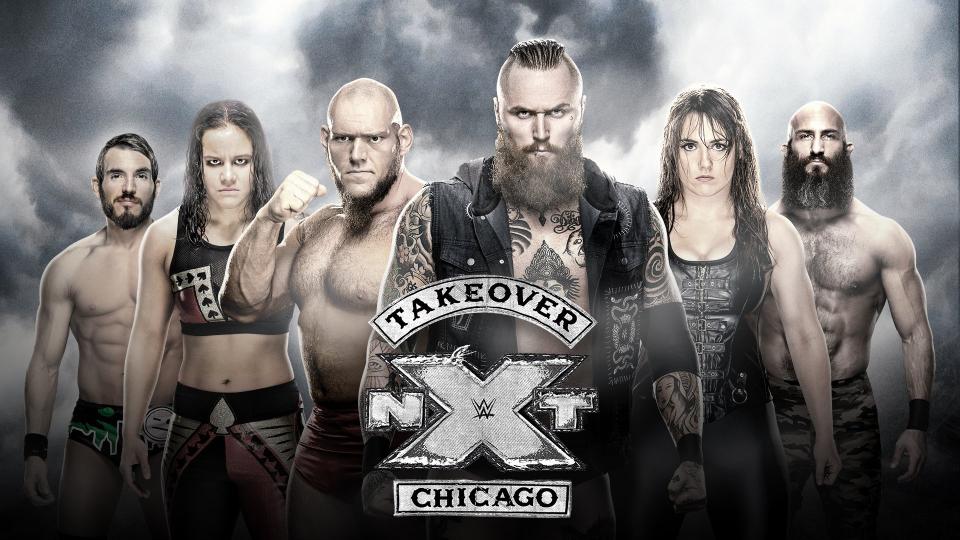 Tonight NXT returned to Chicago to start a weekend that’s all about the future. The Money in the Bank pay-per-view is all about determined the future face of the company with who holds the briefcases.  Tonight was once again about establishing the future of WWE. The card from top to bottom look solid, but it exceeded my expectactions. Before I being with my thoughts here are the results of NXT Takeover Chicago:

The opening match was between the Undisputed Era and the team of Oney Lorcan and Danny Burch. This match was absolutely incredible with a lot of high intensity and hard hitting action. I had said a week ago on the Court of Nerds Podcast Network that Burch and Lorcan wouldn’t win but they would be put on the map. I believe in my heart of hearts that I was right. There were also a few scary points in the match that I thought someone was seriously hurt. That’s what I enjoy about these teams is that they are both so hard hitting. This was an incredible way to start the show, but the excitement didn’t end there. Velveteen Dream came out and channeled his inner Hulk Hogan along with his Prince Puma themed gear. The Velveteen Dream is quickly becoming one of the best storytellers of this generation and because of that he is going to be destined for big things. This match was just an absolute epic masterpiece for the ages. Up until this match, Sami Zayn versus Shinskuke Nakamura was my favorite NXT match of all time, but it’s now in second place. There is a reason John Cena wants to face Dream, and there is a reason that The Rock puts over Ricochet on social media. This match proved both of those reasons and I feel like these two have very bright futures.

The match that I had the least amount of excitement for was Shayna Baszler and Nikki Cross. This is not meant as disrepect towards Baszler but I cannot get into her character. She is a great athlete and getting better in the ring all the time, but she doesn’t have character depth like Nikki Cross does. Nikki definitely helped tell a fun story in the match and it wouldn’t surprise me if she gets moved up to the main roster really soon. With Nikki Cross now out of the way I really don’t know who steps up to challenge Baszler. All the women getting pushed right now are all heels and they have been doing a poor job of pushing Kairi Sane who won Mae Young Classic.  The WWE has a problem right now and it’s not necessarily a bad one. They so much great talent that they don’t know what to do with it all. Following the Women’s Championship we had the NXT Championship match between Lars Sullivan and Aleister Black. These two are undefeated in one on one competition and so a loss was huge in this match. This was a solid match with a just two monsters beating the crap out of each other. Lars may have lost but he did not go down with a solid fight and a little bit of blood. This was another match that exceeded my expectations and went longer then I thought it would or could.

The Main Event was a year in the making from where it started. It was 392 days ago in Chicago that Tommaso Ciampa turned his back on Johnny Gargano. This match was brutal from the start and it did not let up. From where I sit Johnny Gargano and Tommsso Ciampa are the modern day Shawn Michaels and Triple H with how they feud and fight. You know the real life story and you know the story on TV and it’s a thing of a beauty. I have never seen two men who were so close in life just inflict so much punishment on each this day in age. This match could have ended so many times with so many brutal spots, but it was just so hard to keep either man down. Just when I thought Gargano had won the match at the very end there was a twist with Ciampa finally capitalizing on something he planned out earlier in the match. This was such an exciting main event that had me at the edge of my seat the entire time. This was an awesome Takeover show that is going to be remembered for a very long time. The storytelling from start to finish was some of the best I’ve ever seen. It’s going to be hard to top that kind of storytelling throughout an entire show. At the end of night, I have to give the show a 9.5 of out 10 for absolutely near perfection. As far as I am concerned the fallout of this show is going to leave us with no sleep until Brooklyn.