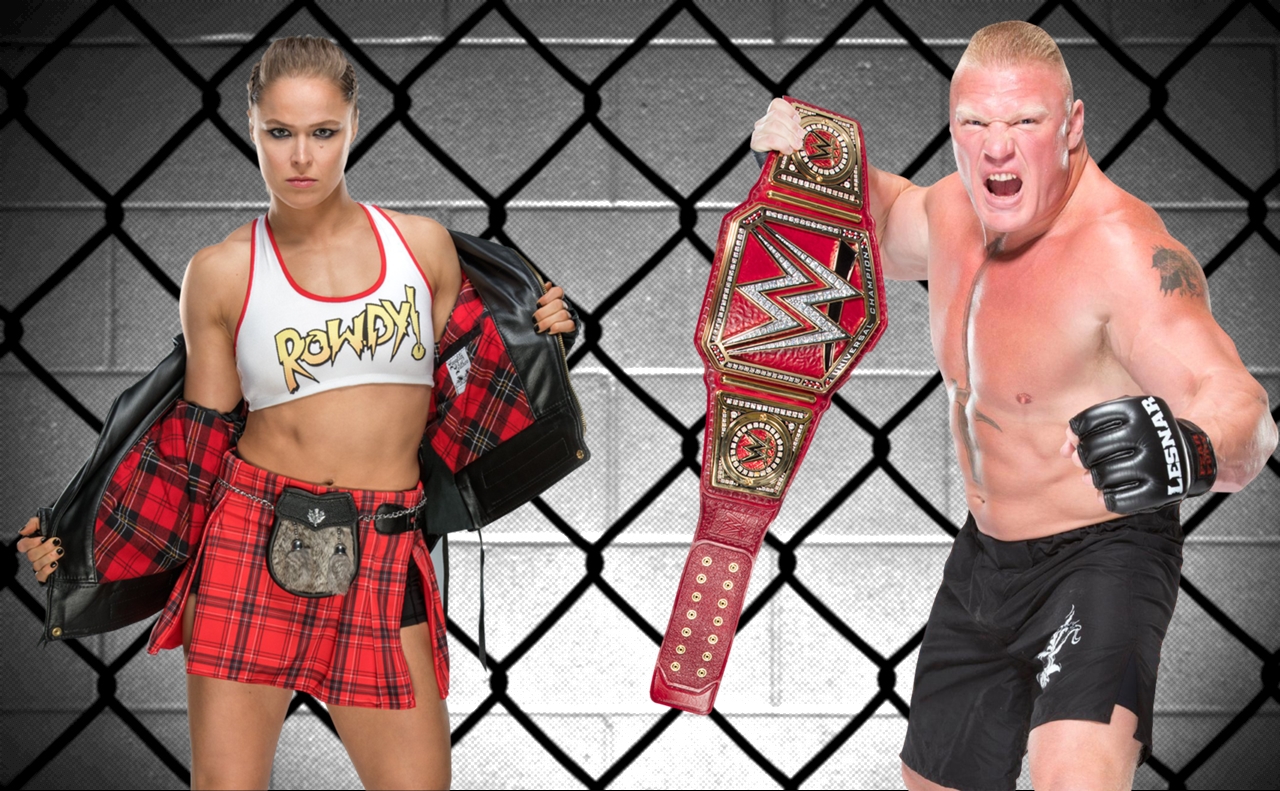 This past weekend the UFC had the yearly Fight Week Festivities where they induct new members into the UFC Hall of Fame and put on their biggest card of the year. Within a matter of 48 hours, the top two paid WWE stars appeared on UFC programming for very different reasons. Over the years both Ronda Rousey and Brock Lesnar have recieved a lot of criticism, naysayers and fans of both industries blasting them all over social media. There are two things that Rousey and Lesnar have in common and that is UFC and WWE. They are both highly decorated athletes who have been in the spotlight and have had ton of media coverage. While they both appeared on UFC programming this past weekend it was for very different reasons. Rousey and Lesnar are two very different people with two very different attitudes. This weekend proved that in such a way where I have a lot more respect for one and a lot less respect for one.

Rousey was inducted into the UFC Hall of Fame and gave a very heartfelt speech about how grateful she was to the fans for allowing her to be the first female to make an impact in the UFC. The critics and keyboard warriors can say what they want about whether or not she deserved this honor but they couldn’t be more wrong. The only female who may have been more deserving then Rousey would have been Gina Carano. Right when Rousey was starting to rise Carano retired and took a different career path. Everyone says she was overrated and she quit due to the two losses she suffered. One of Rousey’s greatest strengths proved to a little bit of a weakness. Her work ethic was incredible and along the way of doing movies, TV shows and other media appearances it made for little time to train for fights. It’s not that Rousey isn’t tough or that she is quitter. I don’t think she was fully prepared for Holly Holm and Amanda Nunes. At Wrestlemania 34, Rousey shocked the world with just how hard she has worked to get that moment. She exceeded expectations and proved that with time she’s only going to get better. I haven’t always agreed with some of things Rousey has said and done, but I have always had the utmost respect for her. She gained even more respect from me, because right after she got inducted into the UFC Hall of Fame she got on a plain and flew to Philadelphia to compete on a WWE Live Event. If this does not make you think twice about your criticism and harsh feeling towards her than I honestly don’t know what will.

At UFC 226, Brock Lesnar appeared on camera right before the UFC Heavyweight Championship fight between Daniel Cormier and Stipe Miocic. Once Cormier won the title he challenged Lesnar to get into the cage in which Lesnar obliged. Lesnar shoved the new champion and cut a promo that wasn’t WWE scripted. This was the first public appearance of Lesnar since WWE’s Greatest Royal Rumble. I don’t know what Lesnar is like behind closed doors, but I can assure you that the way it comes across is that he is self entitled, all about money and all about himself. He went from being one of the most gifted athletes in WWE history to the laziest worker in the companies history. The fact he has held the WWE Universal Championship since last years Wrestlemania is appalling to me consider he’s defended less then ten times. He’s helped the UFC make a lot of money with his fights but he has not done WWE any favors by not being featured on their programming. During Brock Lesnar’s first WWE run and first UFC run I cheered him and had tons of respect for him. Since then the respect has gone out the window. The fact he gets paid more then anyone on the WWE roster is a sick joke considering how much these performers go through on a weekly basis. At least with Rousey she’s working live event and trying to pay her dues and earn her way. If you ask me which Brock Lesnar do I prefer I would tell you that I would prefer him to stay in UFC and leave WWE to those who are actually passionate about it.

It’s a weird cycle sometimes about we were passionate about and how it changes. Rousey was passionate about Judo and MMA, but once her passion ran out she focused on WWE and being the best she can be there. She doesn’t keep going back and forth between both companies. She is committed to WWE now and that’s how it’s going to be for now. Lesnar gives fans the feeling of whether or not he’s coming or going. I understand he wants to do both, but if you’re going to do both than let someone else carry the full time spotlight of WWE. The other thing Lesnar and Rousey have in common is that those criticize and hate on them are keyboard warriors who wouldn’t last a minute in a ring or octagon with either one. I may be critical of their character and decision making at times, but I will never question their toughness and strength. Many question Lesnar’s toughness because he left the UFC after two devastating losses, but what people forget is that he almost died from diverticulitis. The disease made it harder for him to train for fights on a consistent basis and at a high level. Rousey also left after two devastating losses but it wasn’t a matter of her toughness. I believe it was a matter if her heart was fully into it with everything she had going on. That was the past and this is now.  I am actually looking forward to the day Lesnar fights in the UFC again and I am look to see Rousey progresses in WWE. These two are the type of athletes that only come around once in a lifetime. Whether you like them or hate them I do believe we should appreciate them and their abilities. It will be a long time before we see a male and female be successful in two of the same companies.