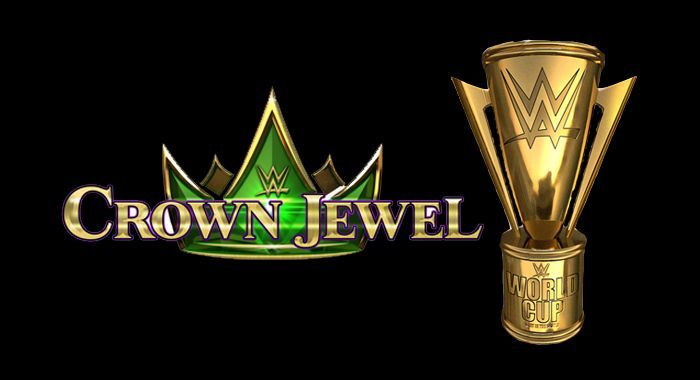 I’ve often lived by the motto that Controversy Doesn’t Come Without Criticism, and there is no event that has had more controversy around it then WWE Crown Jewel. This is the second event that WWE has held in Saudi Arabia this year with the first being the Greatest Royal Rumble. Many people have been upset with WWE for doing these events because of women not being allowed to wrestle, discrimination against other ethnic groups and now the murder of a journalist. The WWE, their performers, and even wrestling journalists have been under a lot of backlash for supporting and doing coverage on this event. I am an American, I am a WWE fan, and I am someone who supports change and human rights. How can we expect change if we don’t take action for change to happen? The WWE has been given the power to make change happen. With all that being said lets talk about wrestling and the in-ring product. Before I begin with my thoughts on Crown Jewel here are the results:

The kickoff show had a match for the United States Championships between champion Shinsuke Nakamura and challenger Rusev. This was actually a very solid match between these two that had a very interesting finish. Nakamura took his low-blow to a whole different level. Ever since Nakamura came to the main roster his two best opponents have been AJ Styles and Rusev. I hope to see more of Rusev and Nakamura in the future. The show started off  with Hulk Hogan making his return to the WWE and capturing the energy of the entire crowd. The opening match of Crown Jewel was between Randy Orton and Rey Mysterio. I had a feeling going into these matches that the first round matches would be short. This match was short, to the point and accomplished what it needed to. After Mysterio won, Orton went on an aggressive attack against Rey, which left him in a vulnerable position for the rest of the tournament.

We continued the tournament on the Smackdown side with Jeff Hardy and The Miz, and I have to say The Miz’s pyro was incredible. I want to point that I love that they are announcing everyone’s accolades and accomplishments before they come to the ring. It makes everyone in this tournament very important and larger than life. The Miz advanced in the tournament to set up he and Mysterio to determine the Smackdown representative in the World Cup. After the Smackdown side was completed we moved on to the Raw side, where Bobby Lashley took on Seth Rollins. This was an intriguing match for me because of the different styles and the fact they have never faced each other before. I am personally happy that Bobby Lashley is a heel and finally get pushed the way he was suppose to all along since he came back. Even though he lost to Seth Rollins, I think some big things are coming for Lashley. With Roman Reigns out with illness I’d expect Lashley to put right back into the main event scene.

The final match of the first round was between two men who have been great at the Collegiate level and have had great careers in WWE. Kurt Angle and Dolph Ziggler had a good match for what it needed to be. As I said before the first round matches were direct, to the point and accomplished what they needed to be. Once the first round was completed the Smackdown Tag Team Championships were defended by The Bar as they took on the New Day. The New Day had an awesome entrance by riding on a Magic Carpet. Unfortunately, the New Day couldn’t capture mgic in a battle thanks to the Big Show helping The Bar keep the Smackdown Titles. I usually get very annoyed with how often Big show turns between face and heel, but I am enjoying this since it benefits The Bar and gives them an insurance policy that they need in the Smackdown Tag Team Division.

Up next, was the semifinals of the WWE World Cup and they started with Smackdown side. A beat up Rey Mysterio took on The Miz in a really solid match. I was honestly really shocked that The Miz went over on Mysterio since Rey has had a lot of momentum since he’s come back. The Raw side featured a rivalry that’s been going on for months now and it featured Seth Rollins and Dolph Ziggler. This match seemed to go on longer than any of the other tournament matches up to this point, which says something about the type of performers Rollins and Ziggler are. I am honestly surprised they went the direction they did with the finals, because Ziggler ended up going to the finals against The Miz. These two have a lot of history together as friends outside the ring and rivals inside. I am honestly a little bit disappointed that we didn’t get to see any dream matches in this tournament. I would have loved to seen Rollins vs. Angle, Hardy vs. Mysterio and the finals being Rollins vs. Mysterio. That is how I saw the tournament going down, but we would have to wait to find who was declared the “Best in the World.” Even though it wasn’t the finals I wanted, it was nice to be surprised on a WWE pay-per-view.

Before the finals could happen we got to see AJ Styles defend the WWE Championship for the second time this week. Styles had a classic match against Daniel Bryan on Smackdown, but once the match was over Samoa Joe returned to attack Styles. These two have had great matches all summer into the fall and this one was no different. My only problems with this is that Samoa Joe now has lost four pay-per-views in a row in a WWE Championship Match. I do think Joe should have won the title at some point, but it wasn’t meant to be. I am not sure where Joe goes from here, because it seems the only place is down. I am hoping he gets a title at some point on the main roster, because it would be an absolute waste if he didn’t. AJ Styles has been WWE Champion for almost a year while Raw had no champion going into the event. Braun Strowman took on Brock Lesnar for the vacated Universal Championship after Roman Reigns had to relinquish it. This match was absolutely pathetic and they completely dropped the ball on building for the future. I am not sure what Vince’s deal is with Lesnar, but this has to stop. You cannot build towards to future by having a part timer as champion. I really hope WWE resolves this issue sooner rather than later.

I wanted to focus on two guys who bust their butts everyday, but instead The Miz gets “injured” and Shane McMahon ends up defeating Dolph Ziggler to be the tournament winner. I am not sure if they are looking to build towards Survivor Series, but if so, this is a terrible way to do it. Basically they just had two part time performers win two matches that were looked at as “prestigious,” It seemed part timers were destined to the takeover the entire show because following these two matches we had the all part timers main event. In the Main Event, D-Generation X took on the Brothers of Destruction and oddly enough it’s match we have never seen before. I will say that I am very shocked and pleased that Shawn Michaels performed as well as he did. For being out of the ring eight years he looked pretty good in the ring. Of course, this is Shawn Michaels we are talking about. He’s arguably the greatest in-ring performer of all time. Unfortunately, the longer this match went on the sloppier it got. This was the first time these two teams squared off, and I hope this is the last time. I have nothing but respect for all four men, but it’s time to step aside and let the new generation take over.

This show started off good, then got bad and then got catastrophically worse. The Universal Title Match and World Cup Finals tanked the show for me. They had a prime opportunity to have some dream matches and build towards the future, but instead they went typical WWE and blew it. I am going to give this show a 4 out of 10 due to lack of progression and two key matches having very sloppy outcomes. I am glad that this show is over and we can hopefully get back to regular programming. In two weeks, WWE presents Survivors Series which is one of the big four pay-per-views. Hopefully WWE can get back on track and survive the garbage they put on display this afternoon.